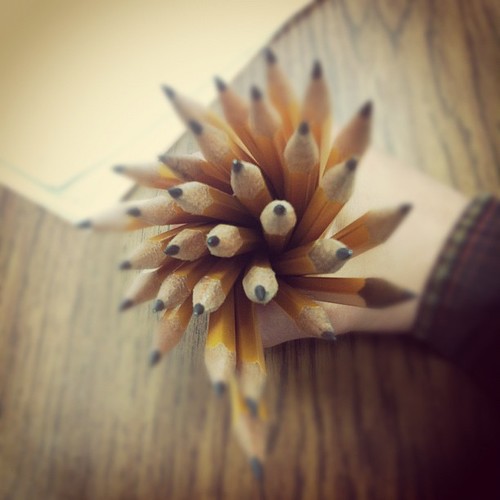 The kidnap of almost 300 girls from a boarding school in Nigeria last month is getting more attention, sure, but the girls are still missing (and other abductions are still happening). Amnesty International said today that the Nigerian military knew about Boko Haram's plans to kidnap the girls, but did not act in time.

The US Supreme Court ruled 5–4 that the Constitution does allow town meetings to start with a sectarian prayer. So that First Amendment thing? Yeah. (In related news, for Supreme Court justices, “Free Speech Often Means ‘Speech I Agree With.’”)

NewSchools Venture Fund CEO Ted Mitchell has been confirmed as Under Secretary of Higher Education. He’ll replace Martha Kanter to become the Department of Education’s highest ranking official. Congrats to his investment portfolio.

The Department of Education and Department of Justice have released new guidelines about undocumented students in public schools: “we have become aware of student enrollment practices that may chill or discourage the participation, or lead to the exclusion, of students based on their or their parents’ or guardians’ actual or perceived citizenship or immigration status. These practices contravene Federal law.”

A court order last year forced Boston College to release to the Police Service of Northern Ireland the transcripts of interviews conducted as part of an oral history project on The Troubles. Content from these led to the arrest this week of former Sinn Fein leader Gerry Adams in a murder investigation.

The Florida legislature has passed a bill that would let parents object to textbooks used in public schools. I can’t imagine anything going wrong with that, eh? And I don’t know about you, but I really cannot friggin’ wait for the 2016 Presidential Campaign when Governor Jeb Bush points to his state as a shining example of education reform!

The US House of Representatives has passed a bill that would reauthorize the Education Sciences Reform Act, “with an eye toward making federal K–12 research more relevant and timely for those out in the field.”

“A class-action lawsuit was filed this week against the Maricopa County Community College District over a computer security breach last year that exposed the personal information of more than 2.4 million people,” reports The Arizona Central.

The White House released a report from its Big Data and Privacy working group that looks at the impact (and ethics) of big data-related technologies. You can read more about this over on Educating Modern Learners, where I picked this as the topic for my weekly “What You Should Know This Week” story (even though I probably should have picked the Pearson/PARCC thing. See below.)

“Teens Blame Michelle Obama for Their ‘Nasty’ Tater Tot-Free Lunches,” says The Wire. Students are upset about the new nutrition guidelines for school lunches and are now reportedly throwing away their food. Because salad. Also this is clearly Michelle Obama's fault. Because Bengazi.

Pearson has won the highly lucrative contract to develop and administer the tests for the Common Core testing consortium Partnership for Assessment of Readiness for College and Careers (PARCC). The states that are part of PARCC collectively educate about 15 million students. So let's see: 15 million times $29.50 per test... Pearson was the only organization to bid for the contract. Side eye.

The American Institutes for Research (AIR), another player in the testing industry, has filed a lawsuit arguing that the PARCC contract was awarded “in a process that was illegal, and structured in a way that wrongly benefited one company—Pearson.”

The latest results from the National Assessment of Educational Progress (NAEP) show no change in US high school seniors’ performance in reading or math. You are free to interpret this information however you like, to justify your beliefs on education policy past, present, future.

From Oklahoma, “The president of testing vendor CTB/McGraw-Hill apologized Thursday to the state Board of Education for Monday’s widespread disruptions in online student tests.”

WTF is up with this test question from Chicago?!

The Chicago Teachers Union has passed a resolution opposing the Common Core.

Southern New Hampshire University’s College for America has done it: a $10,000 college degree. The school will offer a competency-based, self-paced bachelors degree in health care management and communications. More via Inside Higher Ed.

Stanford University’s Board of Trustees have voted to divest from coal mining companies.

The National Hispanic University will close next year. More details via NPR.

Techcrunch reports that the digital publisher Inkling has laid off 25% of its staff. Inkling is moving away from textbooks and other consumer-oriented sales to for on its “enterprise business.”

Chris Stephenson, co-founder of the Computer Science Teachers Association, is stepping down from her role as head of the organization and taking a job at Google. Chris deserves a ton of credit for the push for more computer science education in schools (even though she's never been interviewed by Ryan Seacrest or made videos with Mark Zuckerberg like those Code.org fellas have).

“The National Labor Relations Board is reviewing a federal law that permits private employers to bar workers from using company email accounts for union activities,” The Chronicle of Higher Education reports.

Jonathan Zittrain, who founded Harvard’s Berkman Center for Internet & Society, will now serve as the chair of its Board of Directors.

The University of Oregon has suspended three basketball players accused of rape. One of the students had transferred to the UO, after being suspended from his previous school pending a sexual assault investigation. There are lots of questions about whether or not the university and the local Eugene Police Department reported the incident properly. (Incidentally, “Of the 16 players on Oregon’s roster following its season-ending NCAA Tournament loss to Wisconsin on March 22, four remain in good standing.”)

Google plans to launch a kinda-sorta LMS. The new product Classroom will work on top of Google Apps for Education to “create and collect assignments” and “improve class communications.” And it’ll be ad-free. Whee.

Rovio, the Finnish company behind the Angry Birds game, is developing a preschool curriculum. Because Finland.

The publisher Wolters Kluwer is attaching a license to its sale of legal casebooks, informing students that they may not resell the print copies. This flies in the face of the first sale doctrine. Maybe the publisher should read up on the law.

You can now access Discovery Education higher education content in your Blackboard LMS which I know you’ve all been waiting for.

Textbook publisher Cengage is partnering with Celebrus “to harness the power of big data in education.” (I first read that as Cerberus FYI.)

The “App.net State of the Union” is not strong.

Automattic, the company that makes WordPress, has raised $160 million in funding (“because they can,” writes Boing Boing).

Orbotix, maker of the Sphero robotics toy, has raised $15.5 million from Shea Ventures, Grishin Robotics, and Foundry Group. This brings to $35.1 million the total raised by the startup.

Unigo, which offers student-generated reviews of colleges, has been acquired by EDPlus Holdings LLC.

Allclasses, a search engine for on- and offline classes, has raised $1.5 million in funding from Floodgate, Great Oaks, Atlas Venture, Designer Fund, Maiden Lane, and a group of angel investors from Kayak, Amazon, and DataXu.

Classroom response system-maker Top Hat has raised a $10 million Series B round from Georgian Partners, Emergence Capital Partners, iNovia Capital, SoftTech VC, Version One Ventures and Golden Venture Partners. This brings to $22.6 million the total raised by the startup.

Despite being largely terrible at educating kids, for-profit online edu provider K12 Inc reports that its revenues are up and it plans to expand.

Buzzfeed reports that, in the face of falling enrollments and revenue, the for-profit edu company Corinthian Colleges is exploring putting itself up for sale.

The Gates Foundation will end its funding of the Global Libraries Program over the next 3–5 years. Oh.

Gallup and Purdue have released a poll of 30,000 college graduates about their experiences in and post-college. As always, it’s often just as amusing to see how the press reports these results as reading the actual poll itself.

In the face of the latest panic about schools failing boys, it’s worth noting that “Girls have gotten better grades than boys for 100 years,” as Vox’s Libby Nelson writes.

Yet another study that suggests taking notes by hand helps recall a lecture better than taking notes by typing. But “soon there will be no more cursive writers to buy fountain pens." I guess we've been warned.

“Almost half the students attending public schools are minorities, yet fewer than 1 in 5 of their teachers is nonwhite.”

“Results of a new research review suggest that participants in computerized instruction reach similar destinations regardless of whether the program they use puts them in the drivers seat or just lets them ride along as passengers.” More via EdWeek.

Renaissance Learning has released its annual report on What Kids Are Reading. The report includes a list of the most popular books based on grade level.

“Elementary students spend nearly a third of their time off task, with distractions more likely to happen when children are working on their own or receiving whole-group instruction at their desks.” More on the study in EdWeek.

Wired examines the (“unfinished”) science of brain stimulation. You can try it at home! (Or not.)