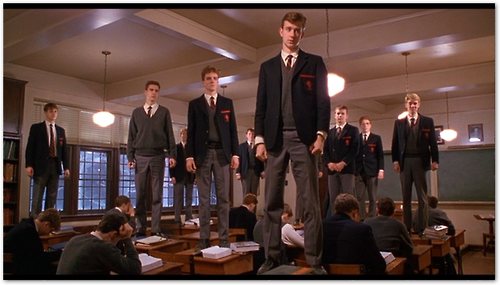 RIP Robin Williams and RIP Michael Brown – my god, this week has been so painful.

“Education Department Awards 40 States, D.C., and the Virgin Islands $28.4 Million in Grants to Help Low-Income Students Take Advanced Placement Tests” – so congrats to the College Board that will profit handily (wink wink) from this boost.

Meanwhile, the Republican National Committee has denounced the the College Board for new frameworks it has issued for the AP US History exam, claiming it promotes a "radically revisionist view of American history that emphasizes negative aspects of our nation’s history while omitting or minimizing positive aspects."

Also heading to the courts: several lawsuits in Louisiana over the state’s adoption (or not) of the Common Core.

A New Jersey high school student has settled a lawsuit with her school district, after she said she was punished for a couple of profane tweets about her principal. The district has reversed its punishments of her and expunged her record. It will also clarify its social media policy.

New York has published a “parents’ bill of rights” (PDF) to address how student data can be used.

The Cape Henlopen School Board in Delaware has scrapped its summer reading list for incoming high school students. Originally the board chose to remove from the list The Miseducation of Cameron Post, a coming-of-age story about a gay teen in Montana. But when anti-censorship groups questioned that decision, the school board ditched the recommended reading list altogether.

The FTC and Indiana attorney general are investigating the test prep company The College Network because of hundreds of complaints of deceptive practices by its salespeople. More from the IndyStar.

Indiana Connections Academy, the state’s virtual charter school outsourced to Pearson, will have a record number of students enrolled this year.

A big PR push from the new for-profit “elite” college Minerva, with stories in Slate and in The Atlantic. Sound the disruption klaxon!

According to the National Center for Education Statistics, minority students will be the majority in US public schools this year. So probably time to rethink that word “minority,” eh.

Princeton is debating getting rid of its policy that caps the number of As professors award.

A federal judge ruled on Friday that the NCAA rules barring college athletes from sharing in the revenues from the use of their names and likenesses violate antitrust law. It’s not the death of the NCAA yet, but the organization is certainly in turmoil. Although the NCAA will appeal, plenty of folks are saying that this ruling will change college sports. Or not.

Former DC schools chancellor Michelle Rhee is stepping down as head of her reform group StudentsFirst. She will now be on the board of directors for Scotts Miracle Gro, and I am gravely disappointed that so few “miracle grow / test score” puns have been made as a result.

Chris Klundt, co-founder of StudyBlue, will be taking over the reins of the company. You can read 1000 words about the flashcard app on Techcrunch.

Half of school employees are not teachers.

“Women Must Submit Pap Smears To Teach in São Paulo”

Google Classroom is now open to those whose schools use Google Apps for Edu.

Schools are buying the vast majority of Chromebooks sold.

Known, which offers a tool to help people “reclaim” their social media data, is working on services for teachers and students.

Teach the whole family to code, thanks to a new guide from the MIT Media Lab.

Dictionary.com is sorry that its definition of “homeschooling” suggested the practice was “mindless.”

Desire2Learn has raised $85 million in a Series B round. Phil Hill raises some good questions about the claims D2L has made to the press about its growth: “It is worth noting that not a single media outlet listed by EDUKWEST or quoted above (WSJ, Reuters, Bloomberg, re/code, edSurge, TheStar) challenged or even questioned D2L’s bold claims. It would help if more media outlets didn’t view their job as paraphrasing press releases.”

JoyTunes has raised $5 million in Series A funding, bringing to $7 million the total the music education startup has raised.

Only .13% of published education research is replication.

Congratulations to Stanford University professor Maryam Mirzakhani for winning the Fields Medal, sorta like the Nobel Prize for math. “The award recognizes Mirzakhani’s sophisticated and highly original contributions to the fields of geometry and dynamical systems, particularly in understanding the symmetry of curved surfaces, such as spheres, the surfaces of doughnuts and of hyperbolic objects.” Mirzakhani is the first woman to win the prize.

How researchers use social media (or not), via Nature.

“Can Universities Use Data to Fix What Ails the Lecture?”

Via the chart-loving Vox: “One chart that debunks the biggest myth about student loans”