The Teacher Wars: A Book Review 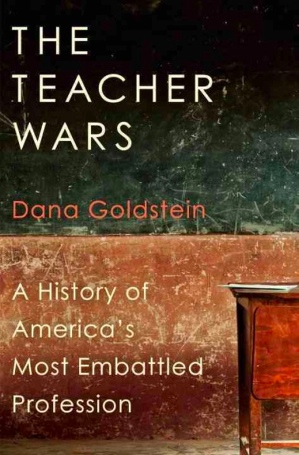 Teaching is, according to the subtitle of education journalist Dana Goldstein’s new book, “America’s Most Embattled Profession.” “No other profession,” she argues, ”operates under this level of political scrutiny, not even those, like policing or social work, that are also tasked with public welfare and are paid for with public funds.”

That political scrutiny is not new. Goldstein’s book The Teacher Wars chronicles the history of teaching at (what has become) the K–12 level, from the early nineteenth century and “common schools" — that is, before before compulsory education and public school as we know it today — through the latest Obama Administration education policies. It’s an incredibly well-researched book that moves from the feminization of the teaching profession to the recent push for more data-driven teacher evaluation, observing how all along the way, teachers have been deemed ineffectual in some way or another — failing to fulfill whatever (political) goals the public education system has demanded be met, be those goals be economic, civic, or academic.

As Goldstein describes it, public education is a labor issue; and it has been, it’s important to note, since well before the advent of teacher unions.

The Teacher Wars and Teaching Machines

To frame education this way — around teachers and by extension, around labor — has important implications for ed-tech. What happens if we examine the history of teaching alongside the history of teaching machines? As I’ve argued before, the history of public education in the US, particularly in the 20th century, is deeply intertwined with various education technologies – film, TV, radio, computers, the Internet – devices that are often promoted as improving access or as making an outmoded system more “modern.” But ed-tech is frequently touted too as “labor-saving” and as a corrective to teachers’ inadequacies and inefficiencies.

It’s hardly surprising, in this light, that teachers have long looked with suspicion at new education technologies. With their profession constantly under attack, many teacher are worried no doubt that new tools are poised to replace them. Much is said to quiet these fears, with education reformers and technologists insisting again and again that replacing teachers with tech is not the intention.

And yet the sentiment of science fiction writer Arthur C. Clarke probably does resonate with a lot of people, as a line from his 1980 Omni Magazine article on computer-assisted instruction is echoed by all sorts of pundits and politicians: “Any teacher who can be replaced by a machine should be.”

Of course, you do find people like former Washington DC mayor Adrian Fenty – best known arguably via his school chancellor Michelle Rhee – who’ll come right out and say to a crowd of entrepreneurs and investors, “If we fire more teachers, we can use that money for more technology.”

So it’s hard to ignore the role that technology increasingly plays in contemporary education (labor) policies – as Goldstein describes them, the weakening of teachers’ tenure protections alongside an expansion of standardized testing to measure “student learning,” all in the service finding and firing “bad teachers.” The growing data collection and analysis enabled by schools’ adoption of ed-tech feeds into the politics and practices of employee surveillance.

Just as Goldstein discovered in the course of writing her book that the current “teacher wars” have a lengthy history, so too does ed-tech’s role in the fight.

As Sidney Pressey, the man often credited with developing the first teaching machine, wrote in 1933 (from a period Goldstein links to “patriotic moral panics” and concerns about teachers’ political leanings),

There must be an “industrial revolution” in education, in which educational science and the ingenuity of educational technology combine to modernize the grossly inefficient and clumsy procedures of conventional education. Work in the schools of the school will be marvelously though simply organized, so as to adjust almost automatically to individual differences and the characteristics of the learning process. There will be many labor-saving schemes and devices, and even machines — not at all for the mechanizing of education but for the freeing of teacher and pupil from the educational drudgery and incompetence.

Or as B. F. Skinner, the man most associated with the development of teaching machines, wrote in 1953 (one year before the landmark Brown v Board of Education),

Will machines replace teachers? On the contrary, they are capital equipment to be used by teachers to save time and labor. In assigning certain mechanizable functions to machines, the teacher emerges in his proper role as an indispensable human being. He may teach more students than heretofore — this is probably inevitable if the world-wide demand for education is to be satisfied — but he will do so in fewer hours and with fewer burdensome chores.

These quotations highlight the longstanding hopes and fears about teaching labor and teaching machines; they hint too at some of the ways in which the work of Pressey and Skinner and others coincides with what Goldstein’s book describes: the ongoing concerns about teachers’ politics and competencies.

The Drudgery of School

One of the things that’s striking about Skinner and Pressey’s remarks on teaching machines, I think, is that they recognize the “drudgery” of much of teachers’ work. But rather than fundamentally change school – rather than ask why so much of the job of teaching entails “burdensome chores” – education technology seems more likely to offload that drudgery to machines. (One of the best contemporary examples of this perhaps: automated essay grading.)

This has powerful implications for students, who – let’s be honest – suffer through this drudgery as well.

Goldstein’s book doesn’t really address students’ experiences. Her history of public education is focused on teacher labor more than on student learning. As a result, student labor is missing from her analysis. This isn’t a criticism of the book; and it’s not just Goldstein that does this. Student labor in the history of public education remains largely under-theorized and certainly underrepresented. Cue AFT president Al Shanker’s famous statement: "Listen, I don’t represent children. I represent the teachers.”

But this question of student labor seems to be incredibly important to consider, particularly with the growing adoption of education technologies. Students’ labor – students’ test results, students’ content, students’ data – feeds the measurements used to reward or punish teachers. Students’ labor feeds the algorithms – algorithms that further this larger narrative about teacher inadequacies, sure, and that serve to financially benefit technology, testing, and textbook companies, the makers of today’s “teaching machines.”

Teaching Machines and the Future of Collective Action

The promise of teaching machines has long been to allow students to move “at their own pace” through the curriculum. “Personalized learning,” it’s often called today (although the phrase often refers only to “personalization” in terms of the pace, not in terms of the topics of inquiry). This means, supposedly, that instead of whole class instruction, the “work” of teaching changes: in the words of one education reformer, “with the software taking up chores like grading math quizzes and flagging bad grammar, teachers are freed to do what they do best: guide, engage, and inspire.”

Again, it’s not clear how this changes the work of students.

What happens to discussion and debate, for example, in a classroom of teaching machines and "personalized learning"? What happens, in a world of schools catered to individual student achievement, to the community development that schools (at their best, at least) are also tasked to support?

What happens to organizing? What happens to collective action? And by collectivity here, let’s be clear, I don’t mean simply “what happens to teachers’ unions”? If we think about The Teacher Wars and teaching machines side-by-side, we should recognize our analysis of (our actions surrounding) the labor issues of school need to go much deeper and more farther than that.