I think it’s fair to say it’s been a particularly difficult week for women in technology. The Grace Hopper Celebration decided to invite a panel of “male allies” to talk about fixing sexism in tech. (Panel members included the CEO of GoDaddy, known best perhaps for its sexist advertising campaigns). Microsoft CEO Satya Nadella said that women shouldn’t ask for raises; they should trust “karma.” And tech educator Kathy Sierra deleted her Twitter account (@seriouspony), leaving behind a really chilling blog post (Wired version) about her ongoing experiences with harassment and trolling. In response, Adria Richards shared some of her experiences with violent threats and harassment as well.

Some people in education technology continue to dismiss this rampant misogyny as something that the tech sector suffers from but that education is somehow immune to. Education and ed-tech are not immune. 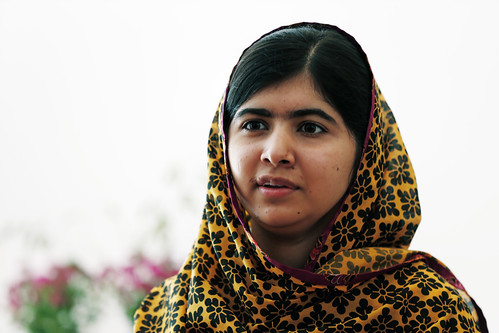 Malala Yousafzai won the Nobel Peace Prize today (sharing the prize with Kailash Satyarthi) for her work campaigning for girls’ right to an education. She is the youngest person to win the award. Yesterday marked the two year anniversary of her being shot by a Taliban gunman as she boarded her school bus.

“I think of it often and imagine the scene clearly. Even if they come to kill me, I will tell them what they are trying to do is wrong, that education is our basic right.” – Malala Yousafzai, in 2011 foreseeing the assassination attempt

The Philadelphia School Reform Commission canceled its teachers’ contract this week, prompting students in Philadelphia to go “on strike” in support of their teachers.

The Easton Area School District in Pennsylvania “has agreed to pay $385,000 to attorneys who successfully challenged the district’s policy banning breast cancer awareness bracelets with the slogan ‘I ♥ Boobies!’”

The US Supreme Court has rejected the appeal of Ohio public school teacher John Freshwater, who was fired for promoting creationism and refusing to remove religious items from his classroom.

“The Los Angeles school district’s bond-oversight panel has rejected a move by officials to spend an additional $42 million on new computers, including purchases under a controversial—and recently suspended—technology contract.” LOL LOL LOL.

GigaOm reports that Amazon is fighting the FTC, refusing to settle over allegations about in-app purchases aimed at kids. (Apple and Google have both settled with the government.)

From Vanity Fair: “If Kentucky Senator and Republican presidential hopeful Rand Paul has his way, classroom sizes will someday rise well beyond their existing ratios of 15-to–1 or 30-to–1. ‘I think we should go to a million to one,’” said Paul. I think he'd be a perfect keynote speaker for SXSWedu.

Protests in Mexico over the disappearance of 43 student-teachers. “The students vanished after police and alleged gang members opened fire on their buses in the southern city of Iguala, located in the violence-plagued state of Guerrero. Six students were killed, while dozens of others were taken away in patrol cars to undisclosed locations.”

A MOOC about abortion. A MOOC on Ebola health care advice.

For-profit giant Kaplan University launches “Open College,” which “will include free online services and personalized mentoring to help people identify and organize prior experience and skills that could count toward a degree or move them closer to a new career. It will also provide fee-based services, under a subscription model, that will offer ways for students to satisfy the remaining requirements for a bachelor of science degree in professional studies from Kaplan University.” And it will also serve as the latest example of “openwashing” in education.

A stinging investigation by the San Jose Mercury News into San Jose State University’s dealings with Cisco: “Pushed by its ambitious president, San Jose State is spending $28 million on high-tech communications systems worthy of a campus of the future – but an investigation by this newspaper shows the project was crafted largely in secret, purchased without competitive bids and adorned with pricey gadgets that many professors may not even use.”

The University of Southern Maine will cut 50 faculty positions and eliminate two academic programs as it tries to deal with budget deficit issues.

“Beginning next year, Indiana University’s Center for Postsecondary Research will produce the Carnegie Classifications,” reports Inside Higher Ed. (The Carnegie Classification of Institutions of Higher Education includes “doctorate-granting universities,” “Master’s Colleges and Universities,” “Baccalaureate Colleges,” “Associates Colleges,” and “NFL Training Campuses.” OK. I made that last one up. Maybe the new classification system should include it though.)

Via The Chronicle: “The University of Maryland University College, fearing that it has lost its mojo as a dominant player in online education and suffering from recent enrollment declines, is considering converting itself into a private nonprofit institution.”

“Education-Degree Programs, Once Popular, Take a Nosedive,” reports The Chronicle. (Note: “Enrollment in for-profit graduate education programs decreased more than 21 percent but was still more than 50 percent higher than in 2004.”)

Here’s how not to teach students about “online safety.”

And in other “shaming women news,” George Will has been uninvited to speak at Scripps College because of an op-ed he wrote about campus sexual assault.

Chicago Teachers Union president Karen Lewis has stepped aside from her role due to a “serious illness,” handing over leadership of the union to its vice president, Jesse Sharkey. No details on the illness, and no word how this might affect a bid for mayor. Although she hasn’t declared her candidacy, she had been exploring the idea and polls suggest she could beat current mayor Rahm Emanuel. (Get well soon, Karen.)

The Smarter Balanced Assessment Consortium, one of the two Common Core assessment initiatives, says that its executive director Joe Willhoft is stepping down and will be replaced by Chief Operating Officer Tony Alpert.

Jim Blew will replace Michelle Rhee as the head of Students First.

Education data company Knewton says that teachers should be treated like software engineers. Or like movie stars. ¯\_(ツ)_/¯

The Digital Reader’s Nate Hoffelder broke the story this week that Adobe Digital Editions has been collecting users’ reading data and sending it back to company servers in unencrypted text. It’s this week’s “What You Should Know…” over on EML, and The Digital Shift has a good summary too about the privacy implications for readers and for libraries.

The Academy of Art University used to grant students permanent licenses for the Adobe CS6 Master Collection as part of their tuition. But apparently Adobe has deactivated these licenses, without any warning, demanding students now pay a $60/month subscription fee to continue access.

Hackers have released a cache of 13GB of Snapchat users’ photos. Although users believe Snapchats disappear after viewing, a third-party app has apparently been collecting these images for several years. About half of Snapchats’ users are between age 13 and 17. “4chan users say the collection of photos has a large amount of child pornography, including many videos sent between teenagers who believed the files would be immediately deleted after viewing.”

“Will Curriculet’s Rentals Mark the End of Physical Libraries?” asks Edsurge. Investors have their fingers crossed, I guess.

Also from Edsurge: an app you can auth via your Twitter account that will tell you which educators to follow and what to read (on Edsurge).

GitHub has launched a “Student Developer Pack,” offering a free Micro account along with discounts on a number of other developer tools.

Tripod Education Partners, “best known for its work on a well-publicized study of teacher effectiveness by the Bill & Melinda Gates Foundation,” is launching a survey tool for teachers. (It must have some hurt feelings that The New York Times tech section gushed about survey startups and didn’t mention it or something.)

Clever has partnered with the AFT to offer its single-sign-on service to the latter’s ShareMyLesson platform – something that’s oddly described in EdWeek as OER. It’s not. In fact, ShareMyLesson’s terms of service are pretty terrible. Funnymonkey’s Bill Fitzgerald has a number of questions about the deal including “What are the financial details of this arrangement? Is AFT getting paid by Clever, is Clever getting paid by AFT, and/or is there any outside funding helping to subsidize this work?”

Bill is on a roll, with a look too at Remind’s privacy policies. On the heels of a $40 million investment in the messaging app last week, it’s definitely worth looking more closely at what happens to student, family, and teacher data.

Meanwhile, a group of tech and textbook companies pinky-swear they’re not going to do bad things with students’ data. Amplify (News Corp) is on the list, so um yeah. I totally believe them. Neither Apple nor Google nor Pearson nor Khan Academy signed. (Pearson did issue a press release “applauding” the idea. But I can’t get it’s website to load. Go figure.)

Microsoft has launched OneNote Class Notebook Creator, which PC World describes as “a classroom assistance application for OneNote and SharePoint Online in Office 365” and Microsoft describes as “a flexible digital framework for teaching and learning.” Right.

ScienceOnline is shutting its doors.

“Is It Ever Okay to Make Teachers Read Scripted Lessons?” asks The Atlantic. Its answer: Yes, in Africa. So there you go.

Adventure to Fitness, which makes online fitness videos for kids, has raised $1.5 million from undisclosed investors.

10 Minutes With, a career matching service for college graduates, has raised $4 million from undisclosed investors. This brings to $4.4 million the total raised by the startup.

Tuva Labs, which wants to bring “data science” into the K–12 classroom, has raised $430,000 from NewSchools Venture Fund and the Ben Franklin Technology Partners of Southeastern Pennsylvania.

Primo, which makes a toy to teach kids programming, has raised $750,000 from Ibis Capital, MTS, and Emerge Education. The startup had previously raised £56,666 via Kickstarter.

For $150 a quarter, you can get Edsurge’s Ka’Ching report, detailing all these funding announcements.

Via Mark Guzdial, “Where AP CS is taught in Georgia and California, and where there is none at all.” (Note the correlation between household income and AP CS. Or as Microsoft's CEO might call it, "karma.")

In South Korea, “an average of one elementary, middle, or high school-age student committed suicide every three days over the past five years, education office data show.”

I feel like this headline circulates every year or so. Once again, someone’s claiming “Teens are officially over Facebook.”

“The World Needs 4 Million More Teachers To Get Every Child In A Classroom,” says UNESCO.

“The National Science Foundation earlier this month awarded a $4.8 million grant to a coalition of prominent research universities aiming to build a massive repository for storing, sharing, and analyzing the information students generate when using digital learning tools,” reports EdWeek. The project, called LearnSphere, will gather “clickstream” data, chat dialogues, and “affect” and biometric data. Ya know, for science.

Does your university require you use an LMS? Colorado State University history professor Jonathan Rees wants to know.