By that, I don’t mean simply that it’s an electronic, educational device. It is that, sure.

The Speak & Spell is a teaching machine specifically in the tradition of B. F. Skinner, reflecting some of both Skinner’s design principles and his theories of learning, decades older than the popular Texas Instruments device. Rather than selecting the correctly-spelled word in a multiple choice quiz, for the example, the Speak & Spell prompts the user to construct the response. It praises; it corrects.

In his "History of Teaching Machines," historian of psychology Ludy Benjamin writes that,

"A teaching machine is an automatic or self-controlling device that (a) presents a unit of information (B. F. Skinner would say that the information must be new), (b) provides some means for the learner to respond to the information, and (c) provides feedback about the correctness of the learner’s responses."

The shared features in most definitions of teaching machines include automation, immediate feedback, and self-pacing. The Speak & Spell has all three, using “contingencies of reinforcement” to establish appropriate spelling behavior. (Some of its engineers thought it would be funny if the user received a raspberry or a funny comment when they spelled a word wrong. But this idea was rejected as it would “reward” incorrect spelling.)

Like so much of education technology, the Speak & Spell takes a behaviorist approach to teaching and learning.

That’s noteworthy, because I would argue that the Speak & Spell has profoundly shaped how we think about electronic educational devices – what we expect these devices to do.

Mobile Computing and Ed-Tech: From Calculators to the Little Professor


Typically the history of the Speak & Spell isn’t traced through B. F. Skinner’s teaching machines but through the calculator. (That being said, Skinner had made significant in-roads into both the engineering crowd and the popular consciousness in the 1950s and 1960s with his teaching machines.)

In 1967, engineers at Texas Instruments developed the first handheld electronic calculator. Thanks to a number of technical developments (single chip microcomputers, LED and LCD, for example), these portable computing devices quickly got better and cheaper. In the early 1970s, calculators could cost several hundred dollars, but by the end of the decade, the price had come down to make them more affordable and more commonplace.

And so, with some resistance and debate about their effect on learning, calculators began to enter the classroom. A new ed-tech market.

In 1976, Texas Instruments introduced what it boasts was “the first electronic educational toy”: the Little Professor. 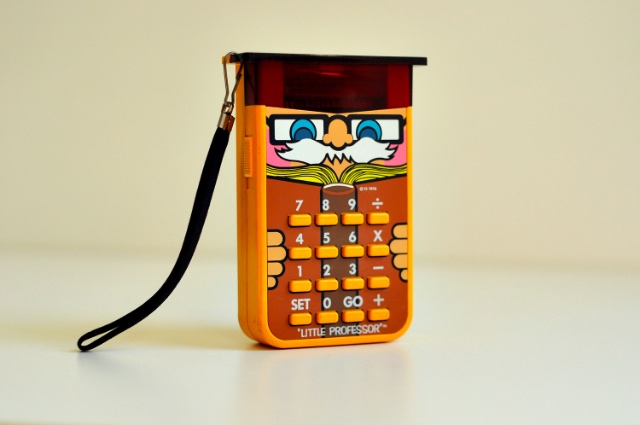 The Little Professor served as a reverse calculator, of sorts. Instead of plugging in a mathematical expression in order to get an answer, the Little Professor provided the expression, and the user had to provide the answer – it is, as some have described it, an “instructional calculator.” According to Texas Instruments,

It functioned as a handheld drill-and-practice aid for basic math, and was designed to resemble a wise and friendly owl. The Little Professor suggested problems to students and rewarded them with a message on its display when they gave the correct answer.


Little Professor was priced to sell for under $20 and was an instant hit. Although production was ramped up, TI couldn’t make enough units to fill the orders for the Christmas season in 1976. Demand for 1977 was more than 1 million units.

The success of the Little Professor prompted Texas Instruments to brainstorm other possible electronic learning products.

The Development of the Speak & Spell


It was Texas Instruments engineer Paul Breedlove who reportedly came up with the idea of a learning aid for spelling. (Interestingly, one of the very first patents for educational devices was awarded in 1866: “an apparatus for teaching spelling.”) Breedlove’s idea was to build upon bubble memory, another TI research effort, and as such it involved an impressive technical challenge: the device should be able to speak the spelling word out loud.

Research began in 1976 – a three-month feasibility study with a $25,000 budget and a team of four: Paul Breedlove, Richard Wiggins, Larry Brantingham, and Gene Frantz. 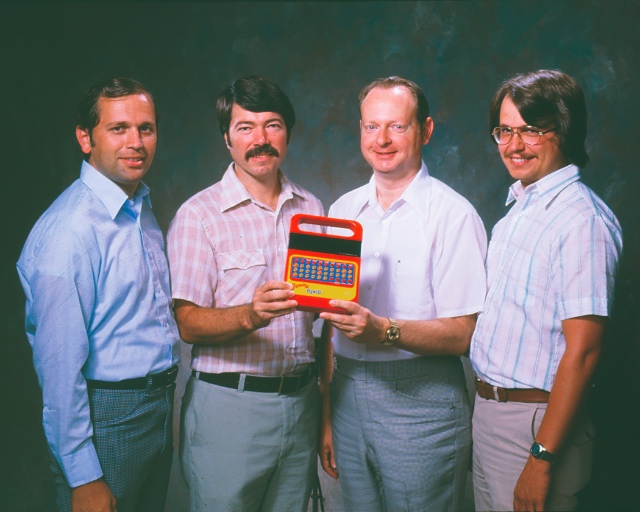 In a 2008 interview with Vintage Computing, Richard Wiggins described the early development process:

Initially, there were only a very few people involved. At the initial meeting in November, Paul Breedlove came over to the research Labs with Gene Frantz and Larry Brantingham from the Consumer Products Group. The result of that meeting was that I was to propose a technique for generating the speech in the product. The challenge was that it had to be solid state (no pull strings!), cheap (meaning it used a low cost semiconductor technology), and the speech had to be good enough so that the user could understand the word out of context — a little bit harder than using a word in a sentence. Larry was a circuit designer and was tasked to determine if what I came up with could be implemented in an integrated circuit. Larry and I spent time together discussing various strategies, and Gene Frantz, who eventually became the project manager, kept the overall design moving forward.


As the program moved forward during 1977, additional people kept being added to the project. It was amazing to me how many people eventually become involved. [There were] people working on which spelling words to chose, what the product should look like, what it should be called, where it would be manufactured, and how it was to be marketed.

The original Speak and Spell was introduced at the Consumer Electronics Show in 1978. The 10“ x 7” orange plastic device contained a library of several hundred “frequently misspelled words.” The machine would say one out loud, and the user would type it via the pushbutton keyboard (later a membrane keyboard instead of raised buttons). As the user typed, the letters would appear on a VFD screen (later LCD) – one form of feedback. (Thanks, Skinner!) From the press release, we can see the other form of feedback: “Right answers earn verbal and visual praise; wrong answers receive patient encouragement to try again. A number of games are offered to intrigue children of all ages.”

The toy had a suggested retail price of $50. (That would be now about $181, adjusted for inflation.)


The Speak & Spell was not the first talking toy. But it was, as Texas Instruments boasted in its CES press release, the first with “no moving parts.” Other toys, such as Mattel’s Chatty Cathy, used pre-recorded voices on phonograph or tape, typically triggered by a pull-string or similar mechanism. These broke easily, as any parent would tell you. So “no moving parts” was a selling point for durability.

But to accomplish that with the Speak & Spell, Texas Instruments had to make an important engineering breakthrough in speech technology.

According to TI’s Richard Wiggins,

I promoted the choice of linear predictive coding to generate the speech signal from a small amount of data. Today, the speech could easily be recorded and stored in large digital memory chips. But in 1976, memory chips were not capable of storing that much data. We considered generating the speech from phonemes or sound fragments but the speech quality was not sufficient. A digital filter could be used and the time varying coefficients could be stored in memory but the amount of computations involved seemed too great.


Also, some kind of speech elements shorter than words were considered, but it appeared that the amount of computer processing to prepare data to drive the speech synthesizer would be too time consuming, and the resulting system would be very complex. We needed something simple to generate the speech sounds, and a preparation system for the data that wouldn’t be too complicated to execute.

The solution: the first linear predictive coding digital signal processor chip, the TMS5100. Each word was represented by a series of phonemes. This speech data was stored in the device’s memory (on 2 128 kilobit ROMs, at the time the largest capacity ROM in use); then when the Speak & Spell was told to say a word, the command was processed through a 4-bit microprocessor and speech synthesizer. Mitch Carr, a radio announcer from Dallas, was chosen to record the speech sounds, thanks to his clear, monotone voice, and according to Texas Instruments, “it marked the first time the human vocal tract had been electronically duplicated on a single chip of silicon.” 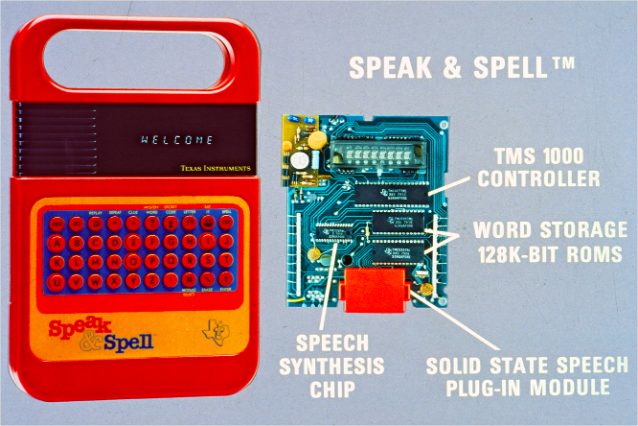 “The Standard for Educational Toys”


The Speak & Spell was one of a trio of talking educational toys released by Texas Instruments that later included Speak & Read and Speak & Math (both launched in 1980).

Speak & Spell was incredibly popular and was sold around the world, with cartridges that offered localized versions of games and word libraries in both different accents (British English versus American English, for example) and languages (Japanese, Italian, French, Spanish, and German).

The Speak & Spell was re-designed several times (the last time in 1992 for the Spanish market only), and Texas Instruments insists, “the basic learning principles and design concepts remain the standard for educational toys.”

But does the Speak & Spell teach?

According to research published in the International Journal of Man-Machine Studies in 1982, users experienced a “significant increase in the spelling of words in the machine’s lexicon.” But that increase didn’t stick. “This appeared to be only a transitory increase because spelling performance on these words began to drop to pre-machine exposure levels once the opportunity to use the machine was removed. No improvement was observed in the spelling of words not in the machine’s lexicon.”

These aren’t uncommon findings, of course. Much of ed-tech is similarly ineffective.

Yet the Speak & Spell has become one of the most iconic pieces of education technology, referenced again and again in pop culture. The device appeared in Toy Story and Toy Story 2 and, most famously, in E.T. the Extra-Terrestrial.

It can be dismantled and reprogrammed to do different things, to serve different purposes. 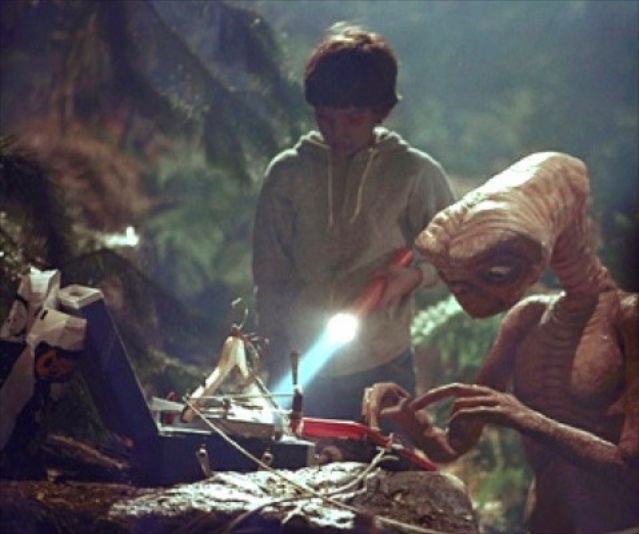 The Speak & Spell is often used in “circuit bending,” for example, whereby the device’s normal functioning is disrupted and distorted to make new sounds by placing an alligator on a particular spot on the circuit board. From Casper Electronics (which offers detailed instructions on circuit bending):

Contrary to how many electronic devices are "closed" and constrained by design, Texas Instruments did not restrict usage of the various language cartridges by region. And the company has not responded negatively to those who “circuit bend” (or show others how to “circuit bend.”) That approach differs, it’s worth noting, from the one that TI took to lock down some of its other computing devices. In 2009, Texas Instruments filed a DMCA takedown request against programmers who’d posted instructions on how to “flash” a new operating system onto Texas Instrument’s TI–83 series graphic calculator; that is, a way to make its devices programmable beyond the TI software.

The Speak & Spell – its software and its hardware – remains (somewhat) “open.” That makes this particular device very different from much of current education technology – tools that are not hackable, not extensible, not inspectable; tools that even if you buy, you don’t really “own” or control.

The Speak & Spell is a behaviorist teaching machine; but it retains for the user the capability to resist that. (Something that I'm sure B. F. Skinner would find quite distasteful.) First, of course, you have to unscrew the back cover, open it up, and hack...