Draw Me: A History of MOOCs

Correspondence Courses and the Pre-History of MOOCs


I’m currently working on an essay on the pre-history of MOOCs – from correspondence courses to teaching machines and television – for a forthcoming book. Of course, I’m hardly the first person or the only person to trace the history of “distance learning” through correspondence courses. That’s where David Noble’s incredibly prescient Digital Diploma Mills starts:

Thomas J. Foster established one of the earliest private, for-profit correspondence schools in Pennsylvania in the late 1880s to provide vocational training in mining, mine safety, drafting and metalworking. Spurred by the success of these efforts, he founded in 1892 the International Correspondence Schools, which became one of the largest and most enduring enterprises in this burgeoning new education industry. By 1926 there were over three hundred such schools in the United States, with an annual income of over $70 million (one and a half times the income of all colleges and universities combined), with fifty new schools being started each year. In 1924 these commercial enterprises, which catered primarily to people who sought qualifications for job advancement in business and industry, boasted of an enrollment four times that of all colleges, universities, and professional schools combined. Copyrighted courses were being developed for the firms in-house by their own staff or under contract with outside “experts,” and were administered through the mail by in-house or contract instructors. Students were recruited through advertisements and myriad promotional schemes, peddled by a field sales force employed on a commission basis. 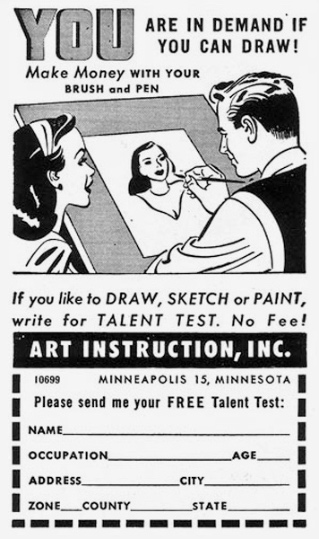 The parallels between the correspondence courses of the early twentieth century and the MOOCs (their venture-funded variety, I should be clear) are quite indicative of how we have long viewed educational “content delivery,” particularly when developed and delivered by a for-profit enterprise.

Take the amount of money spent on marketers versus instructors, for example. Noble estimated that in some commercially-run correspondence schools, “less than one cent of every tuition dollar went into instruction.” Assessment was outsourced to“sub-professional” readers, who were paid on a piecework basis for each lesson they graded. He cites a 1926 survey that found that just 2.6% of students completed the correspondence courses they enrolled in. Sound familiar?

For-profit schools weren’t the only ones to provide correspondence coursework, as universities began offering them during the same period. “Emphasizing the democratization of education and hoping to tape into the lucrative market exploited by their commercial rivals,” writes Noble, “the universities echoed the sales pitch of the private schools.”

But the pitch of a university – particularly from the likes of early correspondence course pioneers University of Chicago and Columbia University – is different than a pitch of a for-profit school, a difference that is always wrapped up in powerful notions of prestige and “brand.” Again, we can see echoes of this in today’s MOOCs which, despite concerns about quality that have plagued distance education throughout its history, insist that they offer “the world’s best courses” from the world’s best universities and the world’s best professors. We can trust the courses are good – the universities’ seal is on the website.

And what sorts of courses – now and then? Ones that promise careers, wealth, job security, and status.


“Art for Pleasure and Profit” – that’s one of the many tag-lines on the advertisements for schools like Art Instruction, Inc., a Minneapolis, Minnesota-based correspondence school that offers study-at-home courses for the would-be artist. Founded in 1914 by The Bureau of Engraving, Inc, the school was, in its own words, designed “to train illustrators for the growing printing industry - and particularly for The Bureau itself.” 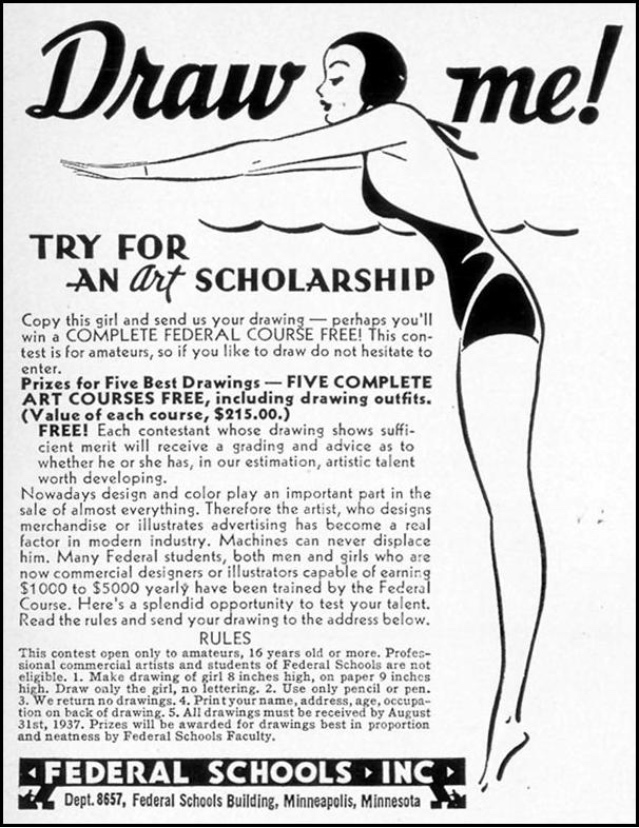 Tucked into the back pages of magazines and newspapers, the ads for Art Instruction have become so popular, so iconic that the school is often referred to by its slogan: “Draw Me.”

These advertisements beckoned aspiring artists to duplicate a character like Tippy the Turtle or Cubby the Bear or to simply "draw a girl," to then mail in the sketch to compete to win a free scholarship to the school – a school that boasted Peanuts creator Charles Shulz as one of its students and one of its instructors. As arts journalist Steven Heller writes about the marketing of the Art Instruction and similar schools,

“What would you give to be able to draw professionally? Do you long for the ability to make splendid pictures, such as you see daily in advertisements, attractive story illustrations, richly colored magazines covers?” Profusely illustrated with photos of artists and examples of their work the Federal School lured prospective students to the practice of commercial art by invoking the glories of advertising, which the catalog declared was “the newest art, the youngest great creative force, in the modern business world.”

Learn to draw, at home, in your spare time – and eventually you’ll be able to make the big bucks.

Today, the Art Instruction School remains in business. Tuition now costs $4285 – $150 down, $150 month in 27 monthly payments (plus one final payment of $85). Students still receive their lessons – 27 lessons – in the mail. They complete these “at their own pace” – “There is no travel, no hassle and no time schedule.” Lessons are sent to the school, where they are assessed and returned by mail. The school says you can call a toll-free number any time to talk to an instructor.

For what it’s worth, the Art Instruction School is accredited by the Accrediting Commission of the Distance Education and Training Council (DETC); and while the American Council on Education's College Credit Recommendation Service does recommend college credit for all Art Instruction School coursework, this is no guarantee that other colleges will accept it for credit. It's not necessarily the case that an employer would recognize the certificate either.

In part that’s because many people sneer at distance education. Many sneer at correspondence courses. Many sneer at online education. That’s not new at all. This is connected to the prestige of (certain) educational institutions themselves. And selling a correspondence course or selling a MOOC certificate can only partially tap into that branding. To market the MOOC, to market the correspondence course, one has to make other appeals as well - appeals to different sorts of power and opportunity, perhaps, and appeals often aimed at those who might be unfamiliar with the very codes of a prestigious “university brand.”


“You are in demand if you can draw!” the ad reads. 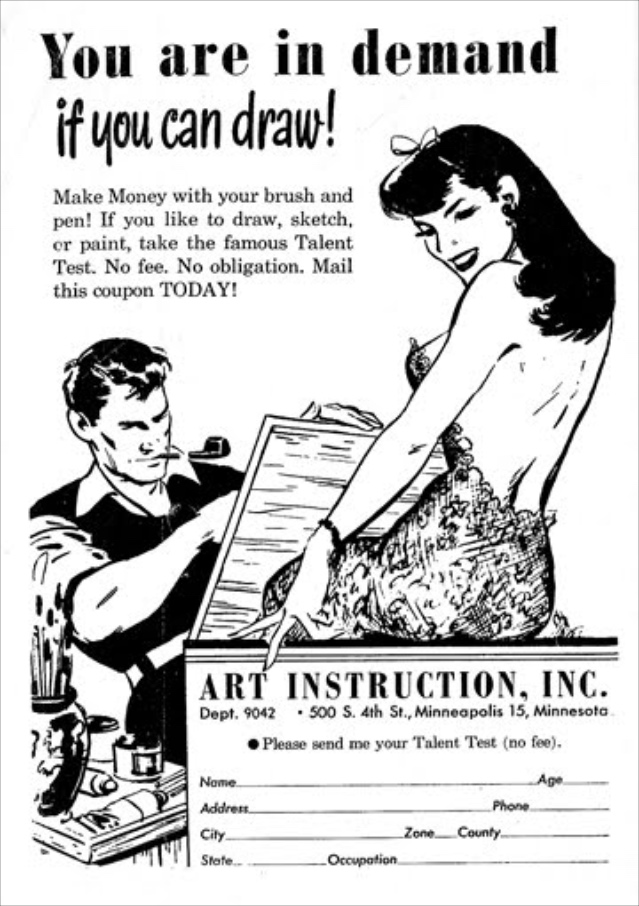 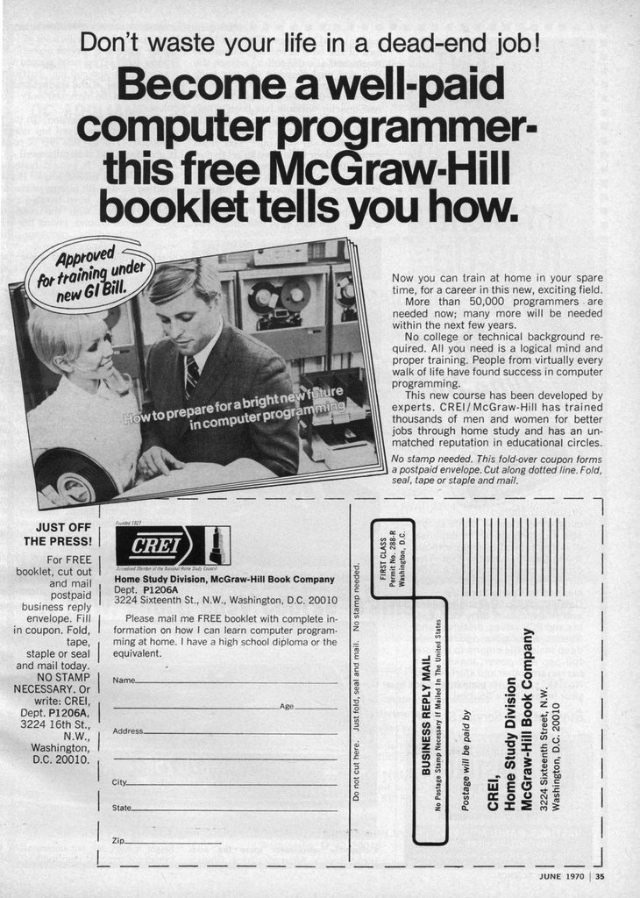 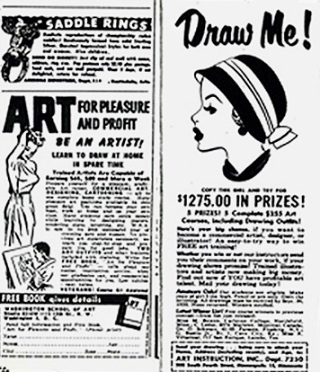 But what brilliance for the Bureau of Engraving Inc to create a training program – a school – for a nascent industry, one that itself was a part of. By doing so, it was able to churn up interest in the field, marketing a story about the career prospects of commercial printing - about its "sexiness" even. Furthermore, the Bureau was able to dictate the content of the coursework, the curriculum so as in turn to shape the field itself - what counted as "skills," what to look for in its workers. So what brilliance too, for the MOOC providers today – grounded as they are in computer science departments at Stanford and MIT – to create similar sorts of training programs for their own field. Tapping into the larger narrative about a so-called “skills shortage,” MOOCs now promise to teach students to learn to code – at home, at their own pace – for “pleasure and profit.”