It's Gonna Take More Than a 'Genius Hour'

A “Genius Hour.” “20% Time.” “An Hour of Code.” These ideas suggest that students should be allotted time during the school week to follow their own interests. But it this really a substantive or sustainable change?

Google’s “20% time” — officially known as “Innovation Time Off” — has become an important part of the company’s mythology. The policy, as described by a Googler in 2006, was about “enabling engineers to spend one day a week working on projects that aren’t necessarily in our job descriptions. You can use the time to develop something new, or if you see something that’s broken, you can use the time to fix it.”

Indeed, when Google went public in 2004, co-founders Larry Page and Sergey Brin argued in their “Founders’ IPO Letter” that 20% time was key to the company’s employees being “more creative and innovative.” Many of Google’s "significant advances,” including AdSense, Google News, Gmail, Google Talk, and Google Reader, were developed in this way.

Recently, this notion of “20% time” has become a popular policy in schools as well. The idea appeals, in part no doubt, because of the hope of spurring that very Google-y sort of creativity and innovation in schools. It’s also an attempt to recognize and make time for student-centered learning. Interestingly, many of the top search engine results for the phrase ”20% time" return examples from schools, rather than from Google itself.

It’s possible, of course, that the search engine results are a reflection of Google ending the policy last year. As the technology site Quartz explains the change,

Here’s how Google has effectively shut down 20% time without actually ending the program, says our source: First, as has been reported previously, Google began to require that engineers get approval from management to take 20% time in order to work on independent projects, a marked departure from the company’s previous policy of making 20% time a right of all Googlers.


Recently, however, Google’s upper management has clamped down even further, by strongly discouraging managers from approving any 20% projects at all. Managers are judged on the productivity of their teams—Google has a highly developed internal analytics team that constantly measures all employees’ productivity—and the level of productivity that teams are expected to deliver assumes that employees are working on their primary responsibilities 100% of the time. (emphasis mine)

This decision speaks volumes: bureaucracy — yes, even at a company like Google that many tend to think as decidedly un-bureaucratic — trumped employee freedom and agency. The possible benefits gained from “20% time” were secondary to demands for productivity and efficiency. Being “on task” was deemed to be more important than being “innovative.”

Even before Google’s decision to scrap the policy, you could hear some of the frustrations from employees that the idea wasn’t all it was cracked up to be. As one former employee noted, "It doesn’t get recognized well for performance reviews. Technically, if you’re doing 20% time, when peer reviews come around, people are supposed to take this into account. In practice, a co-worker who spends 100% of their time cranking away on their main project will look like they’re doing better, get promotions faster, etc.”

There are many lessons to be learned from Google here for schools. Most obviously: if the metrics that matter to those in charge don’t “count” what happens during “20% time,” then “20% time” is easy to scrap. It’s easy to skip. It’s easy to dismiss.

It is, after all, only one-fifth of the week.

But many schools have really seized upon the idea that one-fifth of the week dedicated to student projects makes a difference. Or even less than one day, we’re seeing calls for an hour: “A Genius Hour.” “An Hour of Code.” An hour.

Is that hour really that subversive? What does it mean that schools are applauded when students are sanctioned — for one hour — to follow their passions? What message does that send them about the rest of their day and week at school? Does an hour even count as incremental change? 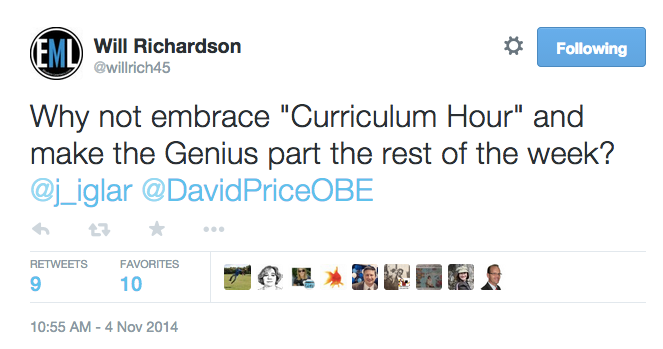 Are these efforts transformative? And are they sustainable? Will these hours or days remain in place? Or will they face the same fate of Google’s policy, and be quickly set aside when schools’ goals trump students’ interests?

Don’t we need to think about how to re-evaluate 100% of time in order to make school more student-centered, not simply fiddle with a fraction of it?