The Horizon Report: A History of Ed-Tech Predictions

For over a decade now, the New Media Consortium has issued an annual Horizon Report, detailing the six technologies that it predicts will soon impact colleges and universities. These predictions identify emerging technologies on three “horizons”: four to five years, two to three years, and one year or less.

The first report, released in 2004, was funded by a grant from the Corel Corporation. The second year’s report was funded by a grant from McGraw-Hill. Since 2006, NMC had partnered with Educause to work on the report. The Horizon Report has rolled out additional versions – starting to cover K–12 trends in 2009, and later expanding to tech trends in museums and libraries as well.

Here’s how the process of creating the report is described in this year’s edition:

Every report draws on the considerable expertise of an international expert panel that first considers a broad set of important trends, challenges, and emerging technologies, and then examines each of them in progressively more detail, reducing the set until the final listing of trends, challenges, and technologies is selected. This process takes place online, where it is captured in the NMC Horizon Project wiki. The wiki is intended to be a completely transparent window into the work of the project, one that not only provides a real-time view of the work as it happens, but also contains the entire record of the process for each of the various editions published since 2006. The wiki used for the NMC Horizon Report: 2015 Higher Education Edition can be found at horizon.wiki.nmc.org.

Stephen Downes covered the release of this year’s report in the OL Daily, and his commentary echoes what has long been one of my frustrations with the project: that it does not revisit previous year’s predictions, and as such does not really explain how or why the trends suddenly appear and disappear and reappear. Every report release always has me going back to previous years’ editions to see for myself what’s changed.

And that means wading through PDFs, which are of course “where data goes to die.” To that end, I started a Horizon Report Data Liberation Project earlier this year so that it would be easier to pull out information from these old reports and make comparisons. (So far, I only have the major trends available in JSON format. Ideally, the full text could be available too, so that you could make other queries than just “what was on the horizon back in 2004?”)

From the first Horizon Report, back in 2004: 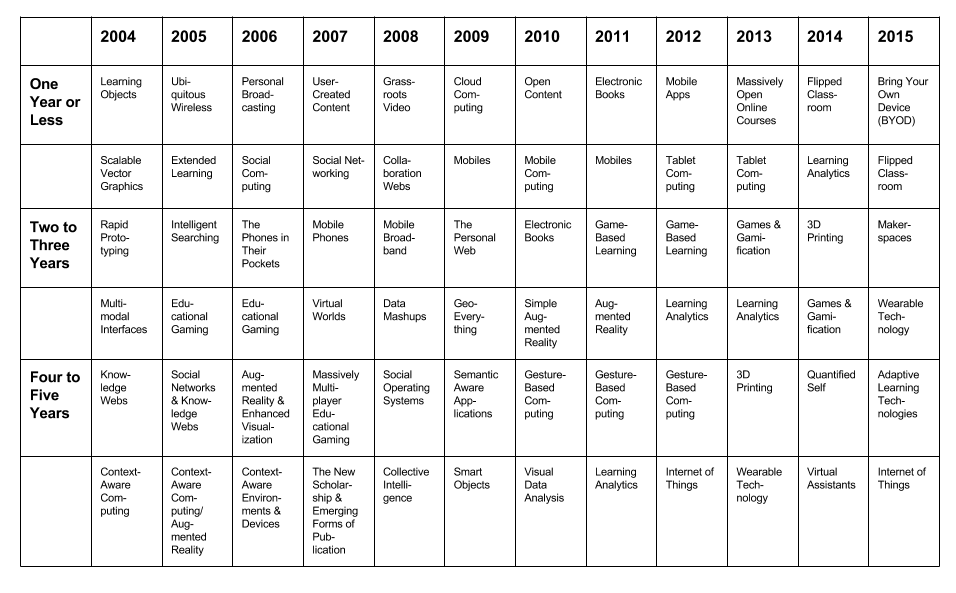 I’m less interested in the accuracy of the predictions about the future of education technology that the Horizon Report has made over the last decade than I am in what those predictions now might tell us about the history of ed-tech. I'm interested in the history of our imagination about education's future and the role technology - and influential ed-tech storytelling - is assigned in shaping that.