11 Atlanta educators were convicted of racketeering this week for their role in the Atlanta Public Schools’ cheating scandal. They face 20 years in prison. (Other educators charged similar crimes elsewhere have been charged with fraud and forgery, and their sentences have been nowhere near as long as those faced in this case.) Sentencing for the Atlanta educators is April 8 – they were led out of the courtroom in handcuffs and will remain in jail until their sentencing. This New Yorker article from last year paints the best picture, I think, about the pressures – political, administrative, and so on – in the district.

The US Supreme Court ruled that GPS trackers are a form of search and seizure, and as such could violate the Fourth Amendment. But hey, let’s hook students up to the Internet of Things!!

The Justice Department is suing Southeastern Oklahoma State University “alleging that the school discriminated against a transgender professor in violation of the Civil Rights Act of 1964.”


Politico reports that the student data privacy bill is “in limbo.” The draft of the bill was withdrawn after it “drew fierce criticism from both parent activists (who deemed it too weak) and ed-tech lobbyists (who viewed it as too tough).”

The US Department of Education has released the names of colleges under "heightened cash monitoring," meaning that immediate financial aid payouts are withheld.

Education Under Secretary Ted Mitchell and officials from the Consumer Finance Protection Bureau and the Treasury Department met with student “debt strikers” this week. The former Corinthian College students are refusing to pay their federal loans. “Some 300 borrowers submitted forms to the Education Department Tuesday under one of those regulations, which provides for a ‘defense against repayment’ when states take action against a college or university,” reports Politico.

The GAO has issued a very critical report about the Library of Congress’s digital infrastructure. (The LOC responds.)


Harvard and MIT released research from “one of the largest investigations of massive open online courses (MOOCs) to date.” Here’s HarvardX researcher Justin Reich’s blog post on the findings. “Who's Taking MOOCs? Teachers,” notes The Chronicle of Higher Education. More details on the research via Inside Higher Ed.

edX has settled with the Justice Department over charges that its materials were not accessible to the disabled. (The National Association of the Deaf had sued because its MOOCs were not closed captioned.) “According to the terms of the agreement, edX will make its website and learning-management system fully accessible to the disabled within 18 months; ensure that the system used to create online courses is also accessible within 18 months; and create two new positions to oversee accessibility, among other things. As part of the agreement, edX denied it was not in compliance with the Americans With Disabilities Act,” the Chronicle of Higher Education reports.

The University of Illinois Senate Executive Committee has passed a resolution that professors should be paid for developing and teaching MOOCs.


147 students were killed at Kenya’s Garissa University by members of Shabab, a Somali terrorist group. More details in The New York Times.

“Everything you need to know about Quebec's latest student strike.”

Common has been uninvited to speak at Kean University’s graduation (because of his 2000 song about Assata Shakur.) He’s still scheduled to speak at the graduation of the City Colleges of Chicago.

UT Austin alum (and Very Serious Actor) Matthew McConaughey is getting $135,000 to speak at the University of Houson's commencement.

The San Jose Mercury News reports that the charter school chain Rocketship “has agreed to dramatically scale back its expansion plans under a settlement reached in a lawsuit filed by four San Jose elementary school districts.”

“Guess What Makes The Cut As A ‘Smart Snack’ In Schools? Hot Cheetos.”

The bathroom break policy at Zephyrhills High School in Zephyrhills, Florida “requires students be escorted and limits the time they can go to the bathroom. No breaks in the first or final 10 minutes of class. Students can go to the restroom without an escort between classes or during their lunch break.”


“NCAA: It’s not our job to ensure educational quality. (Because the NCAA insists they're "student athletes" right up until it shows it doesn't give a damn about the "student" portion of that phrase.)

The Business Insider headline reads “Snapchat is paying college grads almost $500,000 to work there.” But if you read the fine print, you see that most of that is in stock options, so it’s money on paper not in the paycheck. Whee.

From The Chronicle of Higher Education: “Median Salaries of Higher-Education Professionals, 2014–15.”

“Privacy Policies, Shared Openly – List of companies sharing their terms via git.” (This is a small but important step by a number of ed-tech startups towards better TOS transparency.)


Need another hint that “adaptive learning” is mostly meaningless marketing fluff? Here you go: Knewton and HP are teaming up to offer adaptive textbooks… in print.

You can order tutoring services via Amazon.


Ed-tech startups closing their doors: Geddit, Taught It, and MommaZoo.

From the press release: “Donna Krache, former executive producer of CNN Student News and the creator and editor of CNN.com’s ‘Schools of Thought’ announced the launch of a new global education news and information web channel, EdCircuit.com.”

Another new education publication: Bright. Hosted on Medium, Bright is funded by the Gates Foundation and NewSchools Venture Fund.

“Yik Yak Is Testing a Photo Feature. What Could Go Wrong?”


The week in education charts: “The Decreasing Affordability of Public Flagships, in One Chart” via The Chronicle of Higher Education. “The amount of homework kids should have every day, according to science” via Vox.

From Ambient Insight: “Q1 2015 International Learning Technology Investment Patterns” (PDF): “The investments made to learning technology companies in the first quarter of 2015 were the highest for a single quarter in the history of the learning technology industry.” (This is in no small part because of the $186 million invested in Lynda.com.)

“Do Bulletproof Whiteboards Protect Children or Traumatize Them” asks Pacific Standard. (Pretty damning that we even have to ask or frame the question this way.)

Learnsprout’s Paul Smith offers a look at “the world of student information systems.” (For what it’s worth, this line strikes me as dangerous techno-solutionism: “ If the SIS isn't ship shape, Johnny's not getting into Harvard.”)

Via NPR: “Why Babies Love (And Learn From) Magic Tricks.”

“Do Tablets in the Classroom Really Help Children Learn?” asks Gizmodo in a story that gets bonus BS points for the phrase “seamless cloud learning.”

Drawing on an NBC News State of Parenting Poll (sponsored by Pearson), the Hechinger Report asks “Does the anti-Common Core movement have a race problem?”

From the Pew Research Center, “US Smartphone Usage in 2015.” Of note: “12% of African Americans and 13% of Latinos are smartphone-dependent, compared with 4% of whites.”

According to a three year study by Swansea University, “One in 20 uni students work in sex industry to pay for costs.”

“Edtech Women Defy Tech Industry’s Sexist Trends,” according to Edsurge’s managing editor Tony Wan. The “proof”: less than a third of those registered for the chintzy ASU-GSV corporate education investment summit offered information about their startups' demographics, and of those, 29% say they have a woman founder or woman on the executive team. SEXISM DEFIED! I’m pretty relieved, I must say, having dealt directly with harassment, doxxing, and tone-policing in the last few weeks alone. 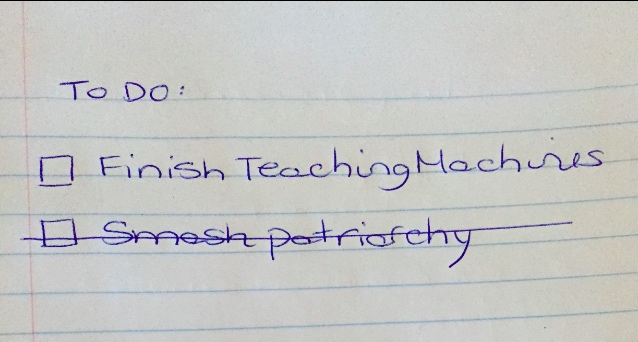 I guess I can work on other stuff now…