Among the things that (education) technology is supposed to revolutionize: memory.

Memory in computers is not wholly analogous to memory in humans, of course, despite using that same word to describe what we are increasingly coming to think of as a process of information storage and retrieval.

Human memory is partial, filtered, contextual, malleable; computer memory is fixed (we hope – until the machinery fails, at least). You store written text about and photos from your vacation on your hard drive, and these will never change; as long as that drive functions and the file format persists, the story of your vacation will remain accessible. Human memory is different. The story – the memory – will change over time. It can be embellished; it can be forgotten. We forget by design.

Now (purportedly) the machine can remember for you.

As educational practices have long involved memorization (along with its kin, recitation), changes to memory – that is, off-loading this functionality to machines – could, some argue, change how and what we learn, how and what we must recall in the process.

And so the assertion goes, machine-based memory will prove superior: it is indexable, searchable. It can included things read and unread, things learned and things forgotten. As such, it is highly “personalized.”


This vision of personalized, machine-based memory is not new (although I would argue it remains almost entirely unfulfilled). Here is an excerpt by Vannevar Bush, Director of the Office of Scientific Research and Development, whose article “As We May Think” was published in 1945 in The Atlantic:

Consider a future device for individual use, which is a sort of mechanized private file and library. It needs a name, and, to coin one at random, “memex” will do. A memex is a device in which an individual stores all his books, records, and communications, and which is mechanized so that it may be consulted with exceeding speed and flexibility. It is an enlarged intimate supplement to his memory.


It consists of a desk, and while it can presumably be operated from a distance, it is primarily the piece of furniture at which he works. On the top are slanting translucent screens, on which material can be projected for convenient reading. There is a keyboard, and sets of buttons and levers. Otherwise it looks like an ordinary desk.


In one end is the stored material. The matter of bulk is well taken care of by improved microfilm. Only a small part of the interior of the memex is devoted to storage, the rest to mechanism. Yet if the user inserted 5000 pages of material a day it would take him hundreds of years to fill the repository, so he can be profligate and enter material freely.


Most of the memex contents are purchased on microfilm ready for insertion. Books of all sorts, pictures, current periodicals, newspapers, are thus obtained and dropped into place. Business correspondence takes the same path. And there is provision for direct entry. On the top of the memex is a transparent platen. On this are placed longhand notes, photographs, memoranda, all sorts of things. When one is in place, the depression of a lever causes it to be photographed onto the next blank space in a section of the memex film, dry photography being employed.


There is, of course, provision for consultation of the record by the usual scheme of indexing. If the user wishes to consult a certain book, he taps its code on the keyboard, and the title page of the book promptly appears before him, projected onto one of his viewing positions. Frequently-used codes are mnemonic, so that he seldom consults his code book; but when he does, a single tap of a key projects it for his use. Moreover, he has supplemental levers. On deflecting one of these levers to the right he runs through the book before him, each page in turn being projected at a speed which just allows a recognizing glance at each. If he deflects it further to the right, he steps through the book 10 pages at a time; still further at 100 pages at a time. Deflection to the left gives him the same control backwards.


A special button transfers him immediately to the first page of the index. Any given book of his library can thus be called up and consulted with far greater facility than if it were taken from a shelf. As he has several projection positions, he can leave one item in position while he calls up another. He can add marginal notes and comments, taking advantage of one possible type of dry photography, and it could even be arranged so that he can do this by a stylus scheme, such as is now employed in the telautograph seen in railroad waiting rooms, just as though he had the physical page before him. 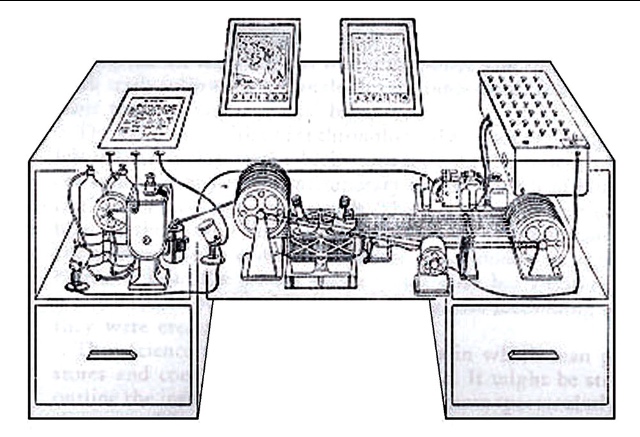 
Bush’s essay and his vision for the Memex influenced both Douglas Englebart (see his 1962 article “Augmenting Human Intellect: A Conceptual Framework”) and Ted Nelson (the Memex, with its associative linking, is often cited as a precursor to hypertext).

While it sparked the imagination of Englebart and Nelson, the idea of the Memex seems to have had little effect on the direction that education technology has taken. (It is in retrospect one of those forks in the history of computing that, as Bret Victor has pointed out, people failed to take.) Indeed, the development of teaching machines, during and after WWII, was far less concerned with an “augmented intellect” than with enhanced instruction.

As Paul Saettler writes about computer-assisted instruction in his history of ed-tech The Evolution of American Educational Technology,

The bulk of the CAI projects during the 1960s and 1970s were directly descended from Skinnerian teaching machines and reflected a behaviorist orientation. The typical CAI presentation modes known as drill-and-practice and tutorial were characterized by a strong degree of author control rather than learner control. The student was asked to make simple responses, fill in the blanks, choose among a restricted set of alternatives, or supply a missing word or phrase. If the response was wrong, the machine would assume control, flash the word “wrong,” and generate another problem. If the response was correct, additional material would be presented. The function of the computer was to present increasingly difficult material and provide reinforcement for correct responses. The program was very much in control and the student had little flexibility.

Rather than building devices that could enhance human memory and human knowledge for each individual, education technology has focused instead on devices that standardize the delivery of curriculum, that run students through various exercises and assessments, and that provide behavioral reinforcement.

Memory as framed by most education (technology) theories and practices has involved memorization – like the early twenthieth century concepts of Edward Thorndike’s “law of recency,” for example, or H. F. Spitzer’s “spaced repetition.” That is, ed-tech products often dictate what to learn and when and how to learn it. (This is still marketed as “personalization.”)

The History of the Future of Personal Learning Infrastructure


The Memex could be seen as an antecedent to more recent efforts like “Domain of One’s Own,” “lifebits” and “hosted lifebits,” and IndieWebCamp, where the shape and control of technology is both individualized and decentralized.

That means that one should ask, of course, who would actually control the Memex. Is the software and the hardware (or in Bush’s terms, the material and the desk) owned and managed and understood by each individual or is it simply licensed and managed by another engineer, company, school, or organization? Who has access to our learning/memories?