What Happened to Educational Television: The Story of 'The Learning Channel'

Earlier this month, In Touch magazine revealed that Josh Duggar, one of the stars of the TLC reality TV show 19 Kids and Counting, had been named in a 2005 police report as an “alleged offender” in a sexual assault probe. Duggar, then a juvenile, had been brought to the Arkansas State Police by his father, but the state trooper – himself later convicted of child pornography – had apparently never followed up. (TMZ claims that Duggar has admitted to molesting 5 girls when he was a teen, including his sisters.)

It’s a rather stunning revelation about someone whose family’s fame rests not just on its size – Jim Bob and Michelle Duggar have 19 children – but on its devout Christianity. The Duggars have homeschooled all their children, severely restricting their access to the media (to TV and the Internet specifically), their dress, and most famously, their relationships with the opposite sex – no hand-holding, no kissing, no sexual contact until marriage.

Although TLC has yanked all scheduled episodes of 19 Kids and Counting from broadcast, it has not officially cancelled the show. (Yet.) As CNN Money observes, “‘19 Kids’ is one of TLC’s highest-rated shows. And TLC is one of Discovery Communication’s most valuable assets. The fate of the show is obviously being orchestrated at the highest levels of the company.” (It’s not the first time that TLC has had to deal with accusations of sexual abuse involving one of its reality TV stars incidentally. Last year, the network cancelled Here Comes Honey Boo Boo after reports surfaced that Mama June Shannon was dating a convicted sex offender – a man who’d molested one of her daughters.)

These stories – heck, its whole programming line-up, with or without sex scandals – often prompt observations like “Remember when TLC used to be called ‘The Learning Channel’?” But the history of TLC isn’t simply a story about changes to branding or programming; it’s also a story of what has happened over the past 40 years to public, educational television – content and courses that, at one time, were available for college credit.

"What is still one of the more interesting uses of new technology traces its beginnings back a decade, when farsighted individuals from a number of federal agencies realized America was on the edge of a major technological breakthrough whose proportions were only being glimpsed at the time." - Harold Morse, President of ACSN-The Learning Channel (1982)


In the 1960s, the governors of Alabama, Georgia, Kentucky, Maryland, North Carolina, South Carolina, Pennsylvania, Tennessee, Virginia, and West Virginia appealed to the federal government for special financial assistance to help support economic and community development in the Appalachian region, which has historically lagged behind the rest of the country. In response, the Appalachian Regional Commission (ARC) was established, and among its initiatives, were efforts to boost access to health and educational services.

The formation of ARC coincided with NASA’s efforts to expand its technologies’ usage for the public good. Along with the Department of Health, Education, and Welfare, NASA began developing plans in 1972 to use its ATS–6 satellite to test the feasibility of broadcasting education and health information – what became the Education Satellite Communication Demonstration (ESCD), a massive education technology undertaking. 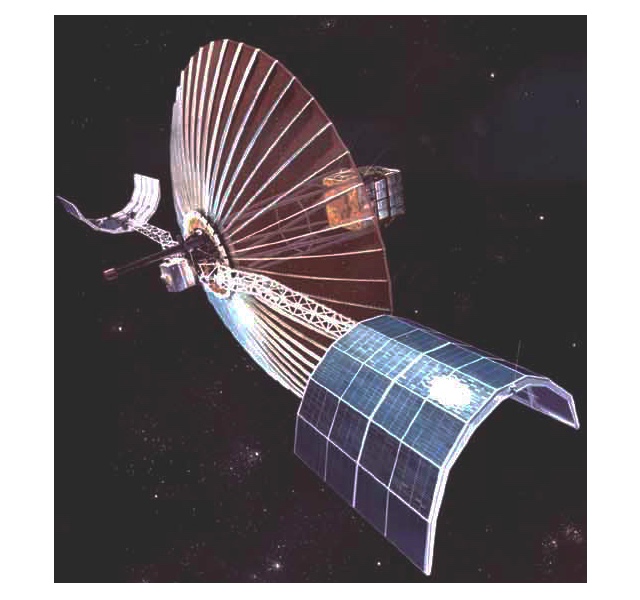 ARC submitted a proposal to participate in ESCD, to use the satellite technology to disseminate “career education” to teachers in the region. The proposal was accepted, and the Appalachian Education Satellite Project (AESP) was created, with 15 receiver sites across 8 states. The AESP worked with local education service agencies to establish these sites where teachers could watch these broadcast courses, which in turn were accepted for academic credit at 12 regional universities.

The ATS–6 satellite was launched in 1974, and the first year of the AESP proved successful. According to a 1982 report on the project submitted to the National Institute of Education, “What was most especially apparent was that the project filled a community need not otherwise easily met, particularly in remote areas. As a result, a demand was being created for the establishment of a permanent communication network to continue and expand the services.”

In 1975, the ATS–6 changed its orbit (moving to transmit educational content to India), and the transmission of educational programming to Appalachia ceased until the satellite returned again to US orbit in 1976. When broadcasting resumed, there were some 45 sites that acted as receivers, some making their antenna available to other local TV stations. Over 2800 people in the region were taking courses delivered via the satellite, and those courses had expanded beyond continuing education for teachers to EMT training and business management.

But in October 1978, NASA announced technical difficulties with the ATS–6; it would not be able to broadcast transmissions for 12 months, the agency said, and it had no plans to replace the satellite either. So ARC decided that instead of ending its educational TV programming, it would purchase transponder time on a commercial satellite.


This meant that the satellite transmissions were no longer free – new and larger expenses forced ARC to find more revenue and to rethink the organization of the project. The Appalachian Community Service Network (ACSN), a non-profit corporation with a board of directors appointed by ARC, was created in 1980. Its mission:


To … conduct … the creation, design development, production, origination, distribution, and broadcasting of educational, cultural, and public service programs on the basis of priorities and needs identified in the Appalachian Regional Development Act. …The programs will be made available to all citizens, with an emphasis placed on the needs of underserved populations in rural and non-metropolitan areas. 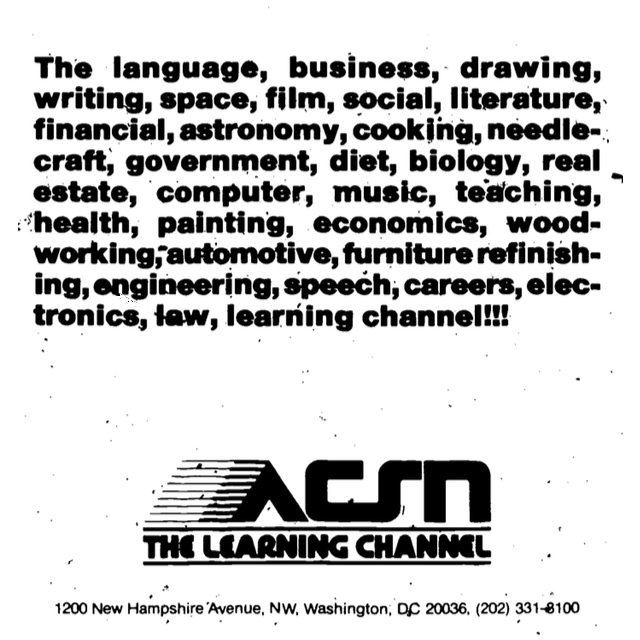 The new network expanded its coverage beyond ARC’s community receiver sites, making its programming available directly to home viewers. ACSN also expanded its programming from formal educational courses to “informational” content. Following its launch in October 1980, the network claimed that it “achieved the fastest rate of growth of all basic cable programming services,” with some 70 cable affiliates and 1.5 million subscribers by 1982. 70 universities granted academic credit for its courses.

In its report to the National Institute of Education, ACSN boasted that it “remains the only cable programming. network with a full-time commitment to the delivery of educational, instructional and informational programs for adult viewers and learners.” 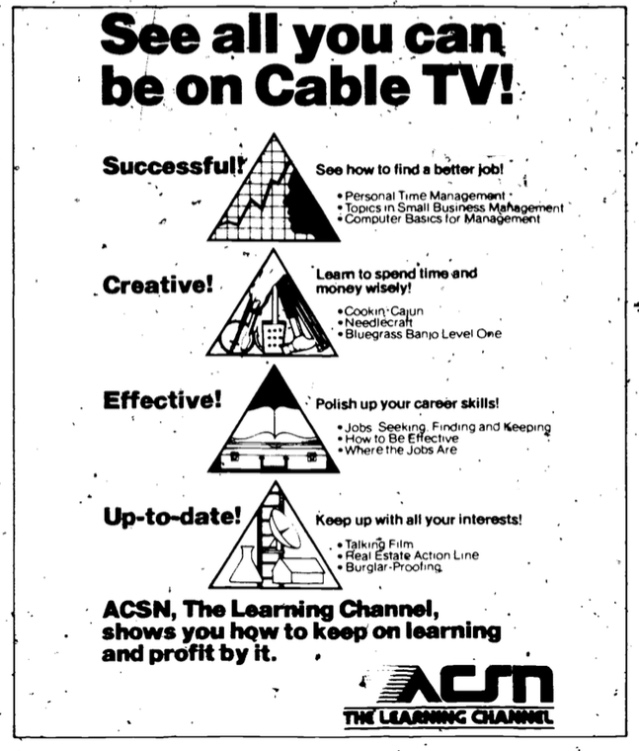 That report details ACSN’s plans in the 1980s to generate revenue – to charge cable fees, to sell ancillary materials, to syndicate its content, to charge universities for credit hours. But the network struggled and increasingly turned to corporate investment. In 1986, Infotechnology Inc acquired a 51% stake in the company for $3 million.


When Infotech and its sister company the Financial News Network declared bankruptcy in 1991, Discovery Communications bought that stake for a reported $32 million. Discovery also bought ACSN’s stake as well, becoming the full owner of The Learning Channel. (Hearst and ABC had offered more money for the channel, but withdrew the offer when TCI, the cable provider that accounted for almost a fourth of The Learning Channel’s subscribers, said it couldn’t guarantee that it would continue to carry the channel. TCI was at the time one of the cable companies that owned a majority stake in Discovery Communications.)

Once part of Discovery, The Learning Channel quickly abandoned the formal educational courseware to other networks (such as the for-profit Jones International University and its network Mind Extension University, later Knowledge TV – also later acquired by Discovery), opting for programming that could appeal to more affluent audiences and in turn, of course, to advertisers. By the early 2000s, the network had dropped its “Cable in the Classroom” programming entirely as well, as it steadily began to distance itself from “learning,” promoting itself instead as “TLC.”

Lessons from The Learning Channel


This history - what TLC has become - shouldn’t simply serve to confirm FCC chairman Newton Minnow’s famous pronouncement that television is a “vast wasteland.” But it does highlight several key issues that education technology continues to struggle with today: