How Sputnik Launched Ed-Tech: The National Defense Education Act of 1958 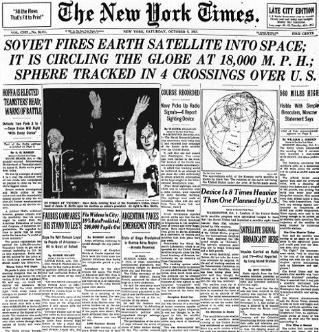 On October 4, 1957 news broke that the Soviet Union had successfully launched the first man-made satellite into space. Sputnik prompted a national panic, not simply over a looming Cold War – the possibility of Soviet spying or bombing, for example – but about the purported failures of the US education system.

According to historian Robert Divine, President Eisenhower was “not impressed by the Soviet Fear. … He believed that American science and American education were much sounder than critics charged, and, above all, he was confident that the United States held a commanding lead over the Soviet Union in striking power.” But the President couldn’t compromise the military intelligence that reassured him that the US was ahead of the USSR in science and in education. And he failed to reassure the public or politicians or journalists that that was the case either.

So something had to be done.

One year later, in 1958, Eisenhower signed into law the National Defense Education Act, a cornerstone of his administration’s response to Sputnik. The law helped reshape education in the US with a massive influx of federal dollars. And it served to give education technology in particular not only funding and legitimacy but its ideological mission: a corrective to progressive education in the name of national security and science.

“When education becomes completely enmeshed in the petty, surface details of a student’s everyday life, it loses the opportunity of equipping him with the intellectual powers that lie beneath the surface. By frittering time away upon the ‘felt needs’ of adolescents, the school runs the risk of leaving its students helpless in the presence of the real ‘real life’ needs that will come later and that will put to test all the resources of a mature and disciplined intelligence.” - Arthur Bestor. Educational Wastelands

Progressive education was already under attack in the 1950s, with accusations from scholars and scientists that it was contributing to a growing anti-intellectualism in the US. It was, according to one admiral, making us “soft.” Progressive education, according to its critics, had become an excuse to not teach a huge swath of schoolchildren how to read and write and do arithmetic. Traditional disciplines were not taught well (or not at all), as the emphasis in schools had supposedly turned instead to “life adjustment” and to vocational, “how to” education. The curriculum along with teachers’ training, these critics argued, had to be more rigorous if American society was to survive.

One of the most popular and prominent critics was Arthur Bestor, professor of history at the University of Illinois and author of Educational Wastelands (1953) and Restoration of Learning (1956). Bestor penned many op-eds in the popular press including “We Are Less Educated Than Fifty Years Ago” in the US News and World Report in 1956. After the launch of Sputnik, Bestor wrote again for the magazine: “What Went Wrong with US Schools?” There he contended that schools were failing to adequately train students and “that’s why the first satellite bears the label ‘Made in Russia.’” 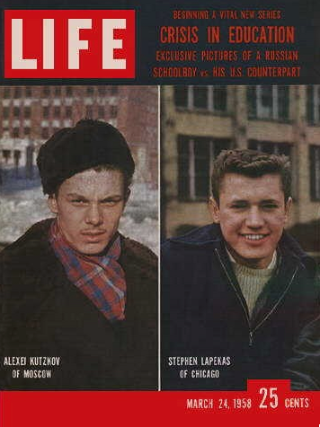 LIFE magazine also ran a five-part series in 1958, comparing schools in the US and USSR. Moscow student Alexei Kutzkov was depicted, serious-faced, performing advanced experiments in physics and chemistry. Chicago student Stephen Lapekas was shown laughing, retreating to the back of the class after he failed to solve a simple geography problem on the blackboard. In typing class, Lapekas jokes, “I type about a word a minute.” Schools in Russia were “austere.” Schools in the US, “relaxed.” The former were exposing students to complex materials like “Shakespeare and Shaw”; students in the US were years behind academically, and they were distracted, surreptitiously reading magazines in class. Teachers were not in control.

“It’s time to close our carnival,” LIFE insisted. “To revitalize America’s educational dream, we must stop kowtowing to the mediocre.”

Schools became a scapegoat as Cold War hysteria kicked in.

“I recognize, of course, that in this dark hour in our nation’s history, we must pool our thinking and ideas that we may come up with the very best program in our battle for survival” – Senator Lister Hill (D-AL) in a letter to an Alabama educator

Sputnik also provided an opportunity for two Democratic legislators from Alabama, Lister Hill and Carl Elliott, to forward their educational agenda, as Wayne Urban argues in his comprehensive history of the National Defense Education Act, More Than Science and Sputnik. As that title suggests, the provisions that ended up in the NDEA involved much more than the response proposed by the Eisenhower administration and addressed much more than “national defense.”

The National Defense Education Act of 1958


Title I reads in part that “The Congress hereby finds and declares that the security of the Nation requires the fullest development of the mental resources and technical skills of its young men and women. The present emergency demands that additional and more adequate educational opportunities be made available. The defense of this Nation depends upon the mastery of modern techniques developed from complex scientific principles. It depends as well upon the discovery and development of new principles, new techniques, and new knowledge.”

Title II dealt with student loans, allocating the amounts and specifying how it would be divided among states. (Initially Title II provided scholarships instead.)

Title IV established a national fellowship program to be awarded for graduate education, with some of the money earmarked for those interested in becoming college professors.

Title VII authorized funding for both the research and implementation of new education technologies, including radio, TV, film, and yes, teaching machines.

The Federal Role in Education


There has long been resistance to federal involvement in education in the US, but pushing for more aid for education was always a cornerstone of Lister Hill’s efforts as a senator – efforts that had failed repeatedly. This was further complicated for the Southern politician by Brown v. Board of Education, prompting Hill to insist that the demand for federal funding was not the same as a call for federal control of education.

In 1956, the first piece of legislation that would provide federal aid for education came before Congress since the Supreme Court’s decision in Brown. Congressman Adam Clayton Powell, an African American representing Harlem, proposed an amendment that would prevent any states that operated segregated schools from receiving federal funding. Indeed, he vowed to attach the amendment to any education-related proposal. That same year, 101 Congressmen signed the “Southern Manifesto,” making clear their opposition to racial integration of public places, including schools.

Both Carl Elliott and Lister Hill, the sponsors of the National Defense Education Act, signed the manifesto.

According to Wayne Urban,

Fortunately for Hill, and for Carl Elliott, the opportunity presented by Sputnik for passage of landmark legislation in federal aid to education was not neutralized by the segregation issue. The federal administration that worked with Hill and Carl Elliott on NDEA was not inclined to support Powell amendments that prohibited racial discrimination, and Hill and Elliott were able to work successfully with the administration to neutralize the Powell amendment in the final version of NDEA that came from a conference committee of the House and Senate. What emerged was a bill that said nothing about racial discrimination but was interpreted to be antidiscriminatory in all its titles. 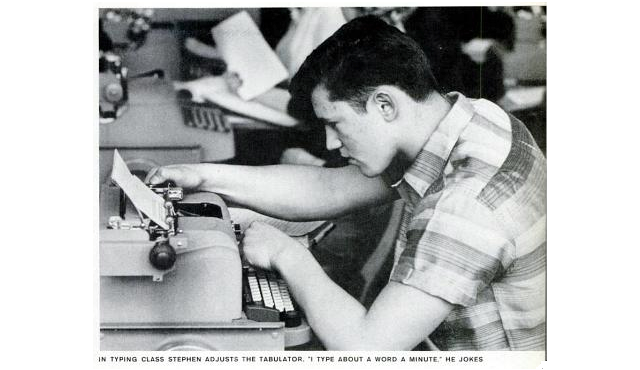 
There are many provisions in the NDEA that have had a lingering impact on education policy and politics – the push for standardized testing; the legitimization of education technology; and most significantly perhaps, the authorization of federal funding for schools and for education initiatives. And it’s noteworthy, of course, that it was the launch of Sputnik that crystallized the efforts to pass the legislation – it’s worth considering how, despite the testing and technology and funding, education has been unable to escape from the crisis (rhetoric) since then either.

Science and technology – then and now, quite arguably – have managed to deflect attention from their own failings onto the school system. And there’s this interesting legacy as well, in scientists’ involvement in shaping the NDEA legislation, in the role of “merit” and “educational excellence.” As Urban argues, the NDEA was

both a science education and a much-more-than-science education measure, and it broke the dam against federal aid to education through astute use of a national defense metaphor by all its proponents. Further, it had liberal democratic provisions pointing toward equity in some of its titles and excellence oriented policies and practice in other titles. The liberal aspects of NDEA pointed toward its immediate successor measures such as ESEA and two higher education acts, but its excellence titles pointed toward the repudiation of equity in the interests of educational excellence that would be the goal of federal educational policy after 1980.

Where does education technology, with its roots in the National Defense Education Act, exist on that spectrum?

Has ed-tech ever furthered equity? Or has it always been about educational measurement and achievement, always wielded to serve arguments about the failures of public education and to stoke fears about Others?