The OECD released a “first-of-its-kind” report earlier this week on computers and education, eliciting – as all of its PISA-related reports tend to do – precisely the responses you’d suspect: a lot of “schools are doing it wrong.”

There’s always a fair amount of handwringing about PISA scores, as though the performance of a country’s 15 year-olds on this assessment is indicative of – or hell, the final word on – the strength or weakness of its school system. The interpretation of PISA scores tends to suffer from confirmation bias, simply affirming pre-existing beliefs about education policies and practices. And of course, PISA scores also provide the media with an opportunity to craft scary headlines about an impending doom of dumb.

In some ways, this week’s report on computers’ effect on learning (or rather, their effect on PISA test scores) is no different, even though it targets a core of modern education mythology: that more technology is more better. There’s the predictable Nicholas Carr-ish response – “see? the Internet is making us dumber”; and there’s the predictable response from ed-tech industry boosters as well, that “it’s not technology’s fault; schools just don’t know how to use tech correctly.”

And then there’s the clickbait – a sample of the headlines:

From The Irish Times: “Lack of computers in schools may be a blessing - OECD report”

From the BBC: “Computers ‘do not improve’ pupil results, says OECD”

From CNBC: “Schools wasting money on computers for kids: OECD”

From The Age: “Are iPads in schools a waste of money? OECD report says yes”

From Bloomberg: “Computers Look Like an Obstacle to Learning”

The OECD report is – no surprise weighing in at 200+ pages – a lot more nuanced than these headlines give credit. But its conclusions are, nonetheless, pretty stark:


The results also show no appreciable improvements in student achievement in reading, mathematics, or science in the countries that had invested heavily in ICT for education. And perhaps the most disappointing finding of the report is that technology is of little help in bridging the skills divide between advantaged and disadvantaged students.

Indeed, technology might actually make things worse, particularly for disadvantaged students, in part because of the type of tech and how it’s used in their classrooms. The OECD report found, for example, that “drilling” software has a negative effect on performance (that is, to be clear again, performance on the PISA). And yet this type of software, and more broadly computer-based math instruction, is much more commonly used for disadvantaged students. 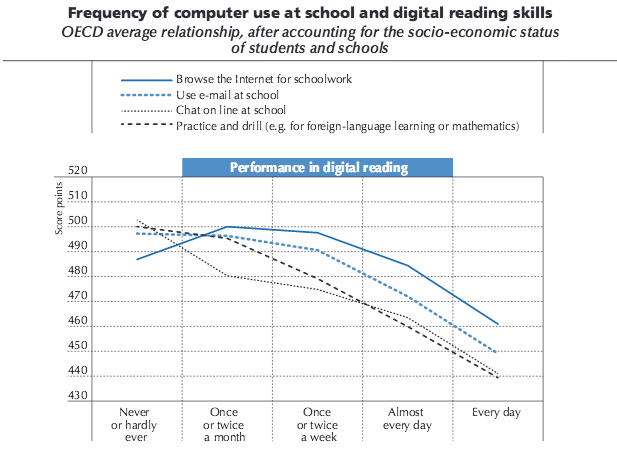 “One interpretation of these findings,” the report’s executive summary reads, “is that it takes educators time and effort to learn how to use technology in education while staying firmly focused on student learning.” Yes, that is one interpretation, one that fits neatly into a narrative that teachers and schools have failed to “innovate.” But rather than allow the burden of addressing ed-tech’s “effectiveness” to be shifted to educators, let’s ask too why so much of ed-tech remains crap – exploitative and punitive crap that is well-funded by venture capitalists and heavily promoted by ed-tech enthusiasts, I might add. Ed-tech that, as this OECD report suggests, likely makes things worse. We cannot shrug and say “it’s not the technology’s fault.” Because what if it is?

“We expect schools to educate our children to become critical consumers of Internet services and electronic media,” the OECD report says, “helping them to make informed choices and avoid harmful behaviours.” But I think expecting schools to educate children to become consumers is a flawed approach to technology from the very start. (It’s one that surely enriches the ed-tech industry, who by all accounts are the ones most clearly benefitting from widespread adoption of tech in the classroom.) This is a flawed approach to education too, I’d argue – this notion that knowledge is something delivered either by teacher or machine and in turn consumed by students. If there is any agency in this equation at all, it’s the agency to buy, not the agency to build. Most ed-tech has done very little to support students’ agency as creators – not just as creators with digital technology but creators of digital technology.

But the same can be said, unfortunately, for most classrooms, with or without computers. Students are objects in the education system, shaped and molded by institutional and societal expectations. Framing students as “consumers” posits that the only place they gain subject status is when we reduce “learning” to a transaction – and in particular to an exchange of money or, increasingly, of personal data. And if that is the framework guiding ed-tech (its present and its future), it should be no surprise that the results will be profoundly unjust.

To its credit, the OECD report does make the following policy recommendation: “Improve equity in education first.”

In most countries, differences in computer access between advantaged and disadvantaged students shrank between 2009 and 2012; in no country did the gap widen. But results from the PISA computer-based tests show that once the so-called “first digital divide” (access to computers) is bridged, the remaining difference, between socio-economic groups, in the ability to use ICT tools for learning is largely, if not entirely, explained by the difference observed in more traditional academic abilities. So to reduce inequalities in the ability to benefit from digital tools, countries need to improve equity in education first. Ensuring that every child attains a baseline level of proficiency in reading and mathematics will do more to create equal opportunities in a digital world than can be achieved by expanding or subsidising access to high-tech devices and services. (emphasis added)

It’s easy to dismiss the OECD report because it draws so heavily on the PISA framework – although no doubt that’s a good reason to be critical of “what counts” here as “learning outcomes.” And surely there are benefits to computers beyond what PISA can measure. But can we articulate what those are? And can we articulate what those are without using meaningless cliches like “innovation” and “collaboration” and “future ready”?

I confess, I’ve grown pretty tired of the response that “we must” use tech. It’s a surrender, too often and again, to this idea that we are required to interact, to connect, to think deeply through the confines of a certain kind of technology, of a certain kind of economic and social and institutional arrangement – as consumers of tech, and as the product itself.

Despite the insistence that digital technologies are “the future” and as such must be incorporated somehow into the classroom, “the future” remains an unknown. We cannot say with any certainty that “the future” will include any of the technologies that we use today. Ten, twenty, thirty years from now, we might not have “Google” or “YouTube” or “Blackboard” or even “the World Wide Web” – we certainly will not in their current form. There is no inevitability to technology nor to the direction that “technological progress” might take.

And education technology in and of itself is surely not progressive.