“Education Department Letting For-Profit Schools Off Because They’re ‘Too Big To Fail,’ Report Says.” See also: “How the Department of Education Could Fix For-Profit Colleges” by Angus Johnston.

Via The Chronicle of Higher Education: “Education Dept. Seeks to Clear a Path to Loan Forgiveness and Recover Lost Loans.”

Houston’s Fox News reported that “US Marshals arresting people for not paying their federal student loans.” But the New York Times writes that “Viral Student Loan Nightmare Is Not What It Seems, Authorities Say.”

Via the Argus Leader: “South Dakota is one signature away from becoming the first state in the country to enact a law that would bar transgender students from using bathrooms, locker rooms and shower facilities of the gender with which they identify if it doesn’t correspond with their biological sex.”

Via the Wichita Eagle: “ Anti-Common Core measure could do away with AP, IB programs in Kansas.” And via The Daily Kos: “KS Republicans: Black History Month May Be Too Long; Move Bill Prohibiting Social Justice Education.”

Legislators in North Carolina are weighing a plan that would cut tuition at some of the state’s HBCUs. According to The News & Observer, it would also change the names of some of the institutions and work to increase student diversity.

Via Vox: “Florida thinks learning to code is like studying a foreign language. Here's why it’s not.”

Via The Chronicle of Higher Education: “Mark Schierbecker, the University of Missouri student who videotaped an assistant professor calling for ‘some muscle’ to keep student journalists from filming a protest, has asked lawmakers to stop using his video, and the incident, as an excuse to cut the university’s budget.”

Via The Chronicle of Higher Education: “The [British] government this month told universities to do more to raise participation rates among white boys from poorer homes and students with specific learning difficulties, as well as students from ethnic minorities.”

The New America think tank has a plan to scrap the current financial aid system and re-start from scratch. Inside Higher Ed has the details.

From the campaign trail…

Via The Chronicle of Higher Education: “Sanders Campaign Shines Spotlight on a Troubled College Presidency.”

Supreme Court Justice Antonin Scalia has died. Cue the constitutional crisis, or something. Here’s some speculation on how his death (and Supreme Court with eight justices) will play on for edu-related issues: “How Scalia’s death may save teachers unions – for now” by the LA Times’ Howard Blume. “Scalia and Higher Ed” by Inside Higher Ed’s Scott Jaschik. “How the Scalia Vacancy Could Save Campus Affirmative Action” by Angus Johnston. (What if Obama nominates Cory Booker as Scalia’s replacement?)

Via the San Jose Mercury News: “California public-school records on about 10 million students – including their Social Security numbers – will soon be handed over to attorneys for a parent group suing the state, with both parties blaming the other for the impending release of private information.”

Via The Chronicle of Higher Education: “The Marvell Technology Group and Marvell Semiconductor Inc. will pay $750 million to end a long-running patent dispute with Carnegie Mellon University.”

Via NJ.com: “A Superior Court judge has rejected a motion by Orange school officials to dismiss the complaint against them from a former teacher who was fired for allowing her third-grade students to write ‘get well’ letters to a convicted cop killer.”

Via the Independent: “Pirate website offering millions of academic papers for free refuses to close despite lawsuit.”

Via Politico: “An estimated 20,000 additional students have passed the GED after the GED Testing Service announced earlier this year that it was lowering the minimum passing score by five points, from 150 to 145, for all test subjects.” #thankspearson

Via the Hechinger Report: “A free, personal tutor for one college admissions exam. But will it work?”

Via Pacific Standard: “Test Scores Drop as the School Day Drags on.”

OpenSAP says its MOOC platform has had over 1 million enrollments. (Does SAP require its employees to sign up? If so, color me unimpressed with this boast.)

“Udemy Thinks It’s Cracked the Future of Online Education.” LOL. Some 10 million users have signed up, so that’s one way to measure “the future,” I guess.

EdX has partnered with Kiron and its university partners to offer college credit online for Syrian refugees.

An op-ed in The Roanoke Times on “Sweet Briar College, one year later.”

Venture capitalist Michael Moritz, chairman of Sequoia Capital, is donating $50 million to the University of Chicago.

Via The New York Times: “At Success Academy School, a Stumble in Math and a Teacher's Anger on Video.” Via Vox: “This viral video of a teacher berating a student is a window on the charter school debate.” (In other Success Academy news, “Dispute With New York City Threatens Success Academy’s Pre-K.”

Via The New York Times: “Cornell’s Plan to Merge Hotel School Gets an Icy Reception.”

Via Bloomberg: “Schroders Plc, Apollo Education Group Inc.’s largest shareholder, plans to vote against a $1.1 billion takeover bid by a group of private equity firms and said it isn’t a done deal.” Meanwhile, the University of Phoenix has a new ad campaign. Because nothing fixes education like marketing dollars.

“India’s biggest student protests in 25 years are spreading to campuses across the country.”

Via The Chronicle of Higher Education: UT Austin’s president released a plan for the new campus-carry law. “The president’s plan, like the task force’s proposals, largely bans concealed firearms from on-campus dormitories and prohibits them from being carried in laboratories where their presence could be especially dangerous. But the plan does not exclude concealed guns from classrooms, a proposal that has left many faculty members wary.”

“Indiana University Bloomington will review the handling of 18 sexual misconduct cases after the associate dean who led hearings on the cases was publicly accused of sexually assaulting a woman,” The New York Times reports. (Jim Groom responds, pointing out problems with the university procurement process and arguing that “This is why we can't have nice things in Virginia EdTech.”)

Via Inside Higher Ed: “The University of Michigan spent more than $10,000 per day on jet travel for its head football coach and his staff in the days ahead of last year’s national signing day.”

Via the Daily Camera: “Conflict between Shakespeare and the Dead will cost CU athletics $100K.” (That’s the surviving members of the Grateful Dead, to be clear.)

“The state of Montana will pay $245,000 to Jordan Johnson, who was a quarterback for the University of Montana and who accused the institution of bias and irregularities in charging him with rape,” Inside Higher Ed writes.

Penn State is successful at recruiting, despite the Sandusky scandal, SB Nation reports.

Via The Chronicle of Higher Education: “Nearly two-thirds of former college football and men’s basketball players who graduated from college like what they do every day and are motivated to achieve their goals, while many of their peer athletes report higher levels of physical and social well-being than do students who didn’t participate in NCAA sports.” (This from a survey commissioned by the NCAA.)

Also via The Chronicle: a judge has thrown out a lawsuit against the NCAA that asserted college athletes should be paid at least the minimum wage.

Via The Chronicle of Higher Education: “The University of Missouri at Columbia announced on Thursday that it had reinstated Patrice Delafontaine as dean of the School of Medicine, effective immediately. Dr. Delafontaine’s sudden resignation in September was among the incidents that contributed to a loss of confidence among other deans in the campus’s chancellor at the time, R. Bowen Loftin.”

The University of Mary Washington has a new president: Dr. Troy D. Paino.

The Gates Foundation has a new director of K–12 strategy: Bob Hughes.

Education Week asks “Could $1 Billion Make Teaching the Best Job in the World?”

I’m noting this here because it falls into one of the ed-tech trends I watch, “the employability narrative.” Also MOOCs. Via The New York Times: “Gearing Up for the Cloud, AT&T Tells Its Workers: Adapt, or Else.”

Amazon is launching an OER platform. (My thoughts.)

“Google Quietly Shutters Play For Education,” Techcrunch reports. But don’t worry. I’m sure the rest of your free Google products are safe forever.

“Even Barbie gets a smart home and a drone in 2016,” says Mashable. Surveillance Barbie. What could possibly go wrong?

Via The New York Times: “Zenefits Scandal Highlights Perils of Hypergrowth at Start-Ups.” The company had created software to allow insurance brokers to cheat on their licensing requirements by bypassing a legally required 52-hour online course. Ed-tech innovation! Zenefits’ investors include Andreessen Horowitz, for those keeping track of how software is eating the world.

Via The Chronicle of Higher Education: “The University of North Carolina system has built a Yelp-like review site for teaching tools, where it is asking professors to review and comment on how useful various digital services were in their classrooms.”

“Private groups step in to show teachers how to use technology in the classroom,” Hechinger Report reports, where “private groups” equals for-profit company BetterLesson and non-profit org Common Sense Media.

I’d wondered if Apple’s latest iOS upgrades that include several “classroom management” features would hurt Nearpod, a startup that has offered something similar. But hey, it looks like the company now says it’s going to offer virtual reality lessons. Pivot. Or something.

Fast Company has listed what it thinks are the most innovative education companies, including one that claims it can read minds which you have to admit is pretty damn innovative.

Via Education Dive: “Digital Promise pushes microcredentials for teacher PD.” With more credential-solutionism, a company called ACUE which The Chronicle of Higher Education covered with this headline: “New Credential Aims to Make Professors Into Better Teachers.”

The Business of Ed-Tech

Rakuten released its annual finances last week, and as The Digital Reader notes, it “took a $70 million write-down on Kobo and and paid five times more than OverDrive was worth.”

Via Edsurge: “NewSchools Ignite, the virtual accelerator attached to NewSchools Venture Fund (NSVF), has launched the Middle and High School Math Learning Challenge, which will provide grants ranging from $50,000 to $150,000 to up to 15 companies creating tools for math education in grades 6–12.”

The FBI has requested that Apple provide a back door to bypass device security. CEO Tim Cook has responded with “ A Message to Our Customers.” (Elsewhere, via The Daily Dot: “ Minorities and women largely shut out of encryption debate.”)

“Is Immediate Feedback Always Best?” asks Edsurge. And golly gee whiz, despite all those ed-tech companies that claim that this is the amazing revolution they offer – immediate feedback – it appears that the answer to the question is “no.” See also: Dan Meyer on the research.

Via The New York Times: “Research Hints at Promise and Difficulty of Helping People With A.D.H.D. Learn.”

Via Education Week: “An Australian study in the Journal of Psychologists and Counsellors in Schools is the latest in a pile of evidence suggesting that, while parental involvement in education is generally helpful, parents don’t always recognize when their involvement crosses the line into harmful ‘overparenting.’” 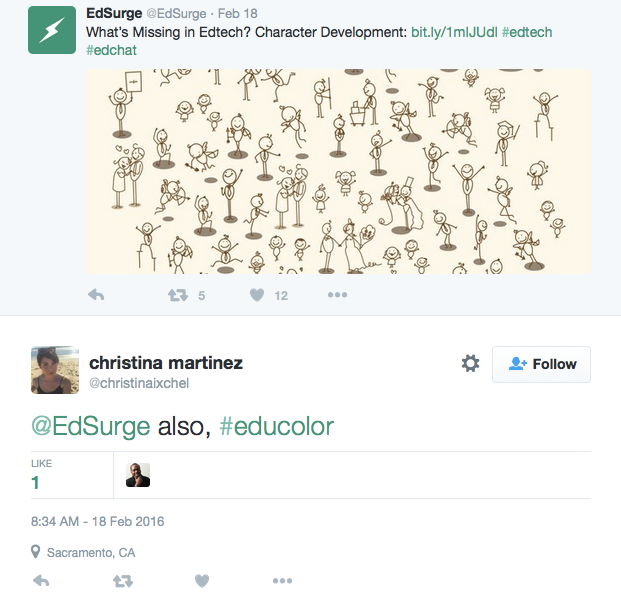 Via NPR: “Standards, Grades And Tests Are Wildly Outdated, Argues ‘End Of Average’.”

Via the Hechinger Report: “Ranking countries by the worst students.” (!!!)