President Obama has nominated Carla D. Hayden as the new Librarian of Congress.

John King Jr had his confirmation hearing this week. Nominated by President Obama to replace Arne Duncan as the Secretary of Education, Inside Higher Ed calls the hearing a “smooth ride.”

Via The Chronicle of Higher Education: “Why University Leaders Want Britain to Stay in the European Union.”

“Washington state lawmakers have about two weeks to come up with a fix that will keep eight charter schools serving about 1,200 students open after the state Supreme Court struck down Washington's charter school law last year,” says Politico.

The Chicago Board of Education has unanimously approved the addition of computer science as a graduation requirement for all CPS students beginning with next year’s freshmen.

Via The Washington Post: “Never finished college? Washington state lawmakers want to help.” “Dean Dad” Matt Reed has more thoughts on a proposed law that would cover the cost of degree completion for students who are fifteen or fewer credits away from graduation.

Via The Globe and Mail: “Ontario to offer grants to cover college tuition for low-income students.”

Jeb Bush has dropped out of the presidential race, “takes extensive K–12 record with him.”

Via Buzzfeed: “Clyburn: Sanders’ Education Plan Is A Disaster For Private Black Colleges.”

Via the San Jose Mercury News: “A jury Monday found three white men guilty of misdemeanor battery on a black suitemate in 2013 at San Jose State University, but did not reach guilty verdicts on more serious hate-crime charges.”

“How easy should it be to fire bad teachers?” ask The LA Times’ Howard Blume and Joy Resmovits in their coverage of the appeal of Vergara v California. More in The New York Times on the court case.

Via Inside Higher Ed: “The U.S. Justice Department on Wednesday charged a professor at Washington State University and two family members with defrauding federal agencies of $8 million in research funds for their personal use.”

Via Inside Higher Ed: “The Consumer Financial Protection Bureau’s ongoing legal battle with an accrediting organization that oversees many for-profit colleges is charting new territory, which experts said could have major implications for the federal government's role in accreditation.”

“Add Maryland to the list of states to find that students tended to score better when taking the 2014–15 PARCC exams on paper instead of by computer,” Education Week reports.

Via NPR: “The State That Pulled The Plug On Computer Testing.” (That’s Tennessee, for those keeping score at home.)

Via Education Week: “The test scores of students who used vouchers to enter a Louisiana private school dropped significantly compared to their peers who remained in public schools.”

edX touts its Global Freshmen Academy partnership with ASU, and that's the only quasi-MOOC news I have this week.

Edit: Wait! Breaking news! After I hit "publish" on this article, I checked my email to find the headline "Welcome to The New Udacity." Udacity has a new logo, you guys!

David Perry has published a chilling set of slides from the University of Houston explaining how faculty should respond to the new law-of-the-land in Texas that allows people to carry concealed weapons on (public university) campuses in the state. 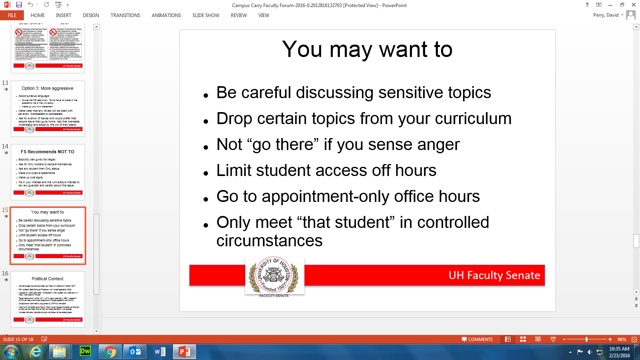 Harvard will no longer use the phrase “house masters” to describe dorm administrators.

“Protesting students at South Africa’s North-West University set fire to various university buildings on Wednesday, completely destroying the administration building and forcing the university to close its campus in Mafikeng indefinitely,” Inside Higher Ed reports. More via The Guardian.

“HBCUs: an Unheralded Role in STEM Majors and a Model for Other Colleges.”

“The authorities in western New York are investigating whether fraternity hazing played a role in the death of a 21-year-old Buffalo State College student from Brooklyn,” The New York Times reports.

The New York Times examines college endowments and how well they perform.

Via The Tennessean: “University of Tennessee football coach Butch Jones told one of his players he ‘betrayed the team’ after the wide receiver helped a woman who said she was raped by two other football players, according to a new legal filing in a sweeping lawsuit filed by six women against Tennessee.” And via NPR: “Coaches Defend University Of Tennessee Amid Sexual Assault Lawsuit.”

Via The Salt Lake Tribune: “The University of Utah roiled fans across the state – and in the Capitol – when it yanked Brigham Young University from next season’s basketball schedule. Now, lawmakers are taking the Utes to task with a sweeping probe of the college’s sports department.” More via The Chronicle of Higher Education and Inside Higher Ed.

Via The Chronicle of Philanthropy: “Donations to U. of Missouri Fall After Football Team Boycott.”

The West Virginia Senate has passed legislation that would home-schooled students to join sports teams. It’s called the “Tim Tebow” bill, because of course it is.

Rosemary Feal will be stepping down as the executive director of the MLA, effective summer 2017.

The Department of Education’s CIO Danny Harris will leave office by the end of the month. “Harris was under fire on multiple fronts, facing not just criticism of Education’s cybersecurity footing but investigations of misconduct by Congress.”

“University of Missouri curators vote to fire Melissa Click,” the Columbia Daily Tribune reports. Click was videotaped asking a student journalist to leave the area during last year’s protests at Mizzou. More on Click via The NYT.

Lila Tretikov has resigned as executive director of the Wikimedia Foundation, a position she’s held since June 2014.

Via The Chronicle of Higher Education: “Jason Casares, the former officer at the Association for Student Conduct Administration who was accused of sexually assaulting the group’s president-elect, has resigned from Indiana University at Bloomington, according to a statement from the university.”

“Who’s Raking in the Big Bucks in ‘CharterWorld’?” asks John Merrow, investigating how much charter school administrators are paid.

Via The Chronicle of Higher Education: “The University of Texas at Austin's longtime architecture dean said on Thursday that he was leaving for a position at the University of Pennsylvania and cited Texas’ controversial campus-carry law as a key factor in his decision.”

The Chronicle of Higher Education chats with Candace Thille: “As Big-Data Companies Come to Teaching, a Pioneer Issues a Warning.”

Open eBooks is a new program that will make e-books available for free to low income students. According to The New York Times, it’s “a partnership between the Digital Public Library of America, the New York Public Library and First Book, a nonprofit group founded in 1992 to provide books and educational materials to children in need. The distributor Baker & Taylor provided content support.” (Don’t be fooled by that word “open.” This isn’t OER.)

It’s time once again for the Google Science Fair.

Via the BBC: “‘Girls in tech’ competition won by boy.”

“Dear Blackboard,” writes Mindwires Consulting’s Michael Feldstein. “I am confused.” Executives at the company have since offered him some clarity. Feldstein also writes about the “One Thing Blackboard is Doing Right” which he contends involves the LMS’s (PR) work on learning analytics.

“Students Are Spending Less on Textbooks, but That's Not All Good,” says Mindwires Consulting’s Phil Hill.

Lumen Learning’s David Wiley writes about a new competitive grant program “that will support the creation of fully OER-based degrees at individual community colleges and in community college systems across the US and Canada. As a result of this program, by fall of 2017 somewhere between 3% and 4% of all community colleges in the US will have at least one all-OER degree program.”

From the press release: “Cengage Learning and Codevolve Partner to Integrate In-Demand Computer Science and Programming Tools into MindTap.”

Via Edsurge: “CareerBuilder and Capella Learning Systems have announced they will jointly launch Rightskill, a program that will engage participants in a 90-day training focused on mobile web development.”

The New York Times discovers “A New Breed of Trader on Wall Street: Coders With a Ph.D.”

“Are Bootcamps the Answer to the ‘Skills Standoff?’” asks a venture capitalist in an op-ed published by Pearson… so I think we can tell where all this is going.

“Sony Vows to Bring 'Blockchain' Tech to Education. Will It Take Hold in K–12?,” asks Education Week. Techcrunch rewrites the Sony press release. (I have a lot of questions about the blockchain in education.)

Via Campus Technology: “A joint project has uncovered how K–12 organizations as well as community colleges can tap into identity federations to take advantage of shared online services.”

The Computer Science Teachers Association has made its proposed CS standards for K–12 available for review.

The digital divide means a “homework gap,” and The New York Times is on it.

The private student loan market continues to grow (and remain largely unreported by the ed-tech press). Via The Chicago Tribune: “Peanut Butter wants to help your boss pay off your student loans.” The Philadelphia Business Journal interviews the CEO of College Ave Student Loans, which recently raised $20 million in venture funding. Another student loan startup, Buddy, raised funding this week (more details below in the “funding” section of this article). And via Frank Pasquale: “Private Lenders’ Troubling Influence on Federal Loan Policy.”

Edsurge interviews the CEO of Nearpod, which has recently pivoted to offering “virtual reality lessons” (which appear to me to be powerpoint slides that you can look at through one of those cardboard viewers.) “This is such an exciting new product,” Edsurge gushes, calling it the first publicly available VR tool for schools and demonstrating perfectly how some folks continue to ignore and/or rewrite the history of ed-tech.

PBS is setting up a 24/7 kids channel. Because the history of the future of education is always broadcast.

Funding and Acquisitions and Other Money Matters

Tebo has raised an undisclosed seed round for its “online teachers book.”

Udemy has acquired TalentBuddy. Terms of the deal were not disclosed.

Follett has acquired online bookstore Classbook. Terms of the deal were not disclosed.

Via The Atlantic: “Against the Sticker Chart.” (No mention of Class Dojo, which is sorta surprising since it's the most popular sticker chart startup.)

Via The Chronicle of Higher Education: “Amid Budget Battle, Moody’s Places 8 Louisiana Universities on Watch for Downgrade.”

According to a study conducted by Columbia University’s Teacher College, “community college students prefer face-to-face courses over online ones in certain subjects and when they think a course is important, challenging or interesting.”

Organization comprised of college bookstores find that faculty love textbooks. News at 11. That is, the Independent College Bookstore Association released a report at its retail conference saying that faculty are still skeptical about digital course materials and are unfamiliar with OER.

Elsewhere in totally independent research, Facebook released a report on the state of Internet connectivity.

Via PLoS One: “A study of almost 2,000 students in introductory biology classes shows that women have to perform a letter grade better in order to get equal recognition from their male peers.”

Via Inside Higher Ed: “The American Council on Education on Thursday released two new papers that call for a less fragmented credentialing system in higher education and for better communication about the value of students’ competencies.”

Via The Chronicle of Higher Education: “State-by-State Breakdown of Graduation Rates.”

From The Washington Center for Equitable Growth: Mapping Student Debt. More on this project via Inside Higher Ed.