As the US Presidential campaign spiraled down down down down down down down this week, the media turned its eye to Trump University, as if this is going to be the big “gotcha” that derails Donald Trump’s campaign. (See: The Chronicle of Higher Education, The New York Times, Inside Higher Ed.) Former chief learning officer Roger Schank also weighs in. A New York appeals court also continues its scrutiny of the scam. More on that in the section below.

Meanwhile, “Trump slams America’s schools in a rally: ‘Some countries you've never even heard of are ahead of the USA’.” “What Would a President Trump Mean for Education?” asks Frederick Hess. He says he has no idea but he wrote a column anyway. As one does.

Via Syracuse.com: “Donald Trump will be president, SUNY professor predicts with 97 percent certainty.”

The nomination of John King Jr as the new Secretary of Education is facing criticism from some activists, with a group letter citing his “ineffective and destructive policies.”

Via The Chronicle of Higher Education: “The U.S. Department of Education’s inspector general has expressed new concerns about a 2015 departmental review of loan servicers, which concluded that the companies generally obeyed rules governing a low-interest-rate benefit for active-duty service members.”

Via The Chronicle of Higher Education: “Tennessee’s Senate Education Committee unanimously approved an amendment on Wednesday that would eliminate state funding for the diversity office of the University of Tennessee at Knoxville.”

A proposed bill in Virginia would require schools notify parents if students are assigned books with sexually explicit content.

Via The New York Times: “As many as 40 percent of students in New York City recommended for special-education services may not be getting them, the Education Department said in a report released on Monday.”

The Times Higher Education looks at the effect Catalan independence might have on higher education in the region.

Via Vox: “Bad news for Donald Trump: a court strengthened a fraud lawsuit against Trump University.” More via The New York Times.

Via The Harvard Crimson: “Harvard jointly filed an amicus brief to the National Labor Relations Board on Monday arguing against the unionization of graduate students, joining six other Ivy League universities, Stanford, and MIT in a call for the board to uphold existing rulings that define the relationship between private universities and graduate students as strictly academic.”

Via Education Week: “College Board Aims at Test-Prep Tutors in Barring March 5 SAT-Takers.” According to Buzzfeed, here is “Everything You Need To Know About The New SAT.” (Since the new test isn’t administered until tomorrow, I’m guessing it’s not everything you need to know.) “Why the new SAT is not the answer,” by Akil Bello and James Murphy.

According to Education Week, the Justice Department is exploring how the College Board and ACT respond to requests for accomodations by students with disabilities.

Via Campus Technology: “Researchers can now access de-identified learning data from more than 230 massive open online courses (MOOCs) hosted on Instructure’s Canvas Network. The company has opened up the Canvas Network data – representing thousands of learning experiences from around the globe – to support research on online course design, large-scale informal learning and more.” Researchers have to agree to a terms of use, the article suggests. No word on whether MOOC enrollees knew they’d be signing away their data.

Via the International Business Times: “Google Gets Sued Over Face Recognition, Joining Facebook And Shutterfly In Battle Over Biometric Privacy In Illinois.”

Via Inside Higher Ed: “Learners who sign up for a massive open online course just days before it starts and complete a precourse survey are much more likely than their peers to finish the MOOC, according to a new paper published in the Journal of Higher Education.”

The K–12 online school company K12 Inc, known for the shoddy quality of its programs, will focus more on “virtual career tech education.”

This week in rebranding bullshit: “Ubiquitous learning could push the term ‘online’ out of education.”

Northwestern University will eliminate loans as part of its student aid packages.

“Minnesota State University at Moorhead has announced an unusual scholarship program,” Inside Higher Ed reports. “Four $2,500 scholarships and two $1,000 scholarships will be awarded (on top of other aid for which students are eligible) based on tweets.”

Middlebury College has banned the sale of energy drinks, says Inside Higher Ed.

“The U.S. Department of Education’s Office for Civil Rights has opened new investigations into alleged sexual violence at University of Notre Dame and University of Chicago,” reports Jezebel.

“The Massachusetts Institute of Technology and a student protest group have reached an agreement that will end a sit-in that has been going on in the administration building since October,” Inside Higher Ed reports.

Via The Miami Herald: “Mattia College closes, other Florida for-profits may follow.”

Via The Chronicle of Higher Education: “The Outsourced College.”

Via The Pacific Standard: “The Daycare Industry, Exposed.”

Via The Chronicle of Higher Education: “Wary of Concussions, Ivy League Moves to Bar Tackling in Football Practices.”

Via The Chronicle of Higher Education: “The Hottest Hire in Athletics? Learning Specialists.”

After its accreditor “raised questions” about the ongoings at Mount St. Mary’s College, its controversial president Simon Newman quit.

Dale Dougherty has returned as the CEO of Maker Media.

The Chicago Public Schools will lay off 62 employees, 17 of them teachers. In turn, Chicago teachers might strike.

Via The Chronicle of Higher Education: “Larycia A. Hawkins, the associate professor of political science who was placed on leave by Wheaton College, in Illinois, for expressing solidarity with Muslim students, has a new job, at the University of Virginia.”

“The dean of Kansas University’s School of Social Welfare submitted his resignation Wednesday, after less than a year on the job, citing ‘daunting’ challenges at the school,” the Lawrence Journal-World reports.

Via Inside Higher Ed: “Carolyn Stefanco, president of the College of Saint Rose, cut 23 faculty positions and 12 academic programs. She won a prize for her efforts.”

“The chief of the University of Cincinnati’s police force and a major in the department resigned on Friday as part of an outside review that was conducted following a fatal shooting last summer by an officer on the force,” The Chronicle of Higher Education reports.

“The University of Oregon has announced the sudden resignation of its police chief, Carolyn McDermed, who will leave a department that in recent years has brought unwelcome attention to the university,” The Chronicle of Higher Education reports. (That unwelcome attention, for those who forgot, involved keeping an extensive list of folks who should “eat a bowl of dicks.” Go Ducks!)

Via The New York Times: “A South Carolina high school teacher who says she was forced to resign after a student took her phone and circulated a nude picture of her has garnered the support of hundreds of students who signed a petition demanding she be reinstated.”

“Facing a $7-million budget deficit, John A. Logan College’s Board of Trustees approved 55 faculty and staff layoffs on Wednesday,” The Chronicle of Higher Education reports.

No, researchers did not discover a Matrix-like way to upload learning into your brain, despite all the wonderful tech journalism that said so.

“McDonald’s Is Now Making Happy Meal Boxes That Turn Into Virtual Reality Headsets,” says AdWeek, and I cannot wait for the McDonalds-Certified Educators to offer workshops on this at ISTE.

There were lots of inaccurate reports this week that Google was launching a new “kid friendly” search site called Kiddle.co. It’s not a Google site at all (and appears to be run by the founder of freakingnews.com to give you an idea of how well it’ll curate “search”), but hey, why would we expect tech writers to research or verify anything before they hit “publish”?

Slate’s Rebecca Schuman looks at Teachur, a startup that promises a $1000 college degree. “Most of the $1,000,” writes Schuman, “will go to pay for ‘blockchain-verified assessments,’ which is ed-tech speak for ‘stuff that is set up to prevent fraud and cheating.’” Man, if only Trump University had offered assessments via the blockchain!

Edsurge has released its first AT&T-funded report on the trends driving the ed-tech market.

Via The LA Times: “How a security upgrade makes it harder to apply for financial aid this year.”

The Cato Institute’s Neal McCluskey argues in The Wall Street Journal that we should restrict access to student loans to those deemed “college ready.” “Dean Dad” Matt Reed reponds, calling the proposal “as offensive an argument as I've seen in major media in a long, long time.” Tressie McMillan Cottom takes her response to Twitter, noting that “privatizing access without an equal public option is absurdly racist.”

Amazon and the National Federation of the Blind have reached an agreement, EdWeek reports in its Market Brief, so that the latter will support in the former in efforts “to improve reading experiences for blind, low-vision, and deaf-blind students.”

Via The Atlantic: “Will the Push for Coding Lead to ‘Technical Ghettos’?”

Via Bright: “How the sharing economy is creating a marketplace for cheating.”

Curriculet is moving away from a freemium model, but its “big changes empower students” (whatever the hell that means), says Edsurge.

The “Transcript of Tomorrow”!

Andrew Hacker’s new book The Math Myth: And Other STEM Delusions seems to have renewed the debate on whether or not we should require Algebra II. Here’s Dana Goldstein writing in Slate. Here’s Anya Kamenetz reporting for NPR. Math professor Ketih Devlin responds, suggesting there’s a math myth permeating The Math Myth.

The Business of Ed-tech

Mimio has been acquired by Boxlight Corporation. Terms of the deal were not disclosed. 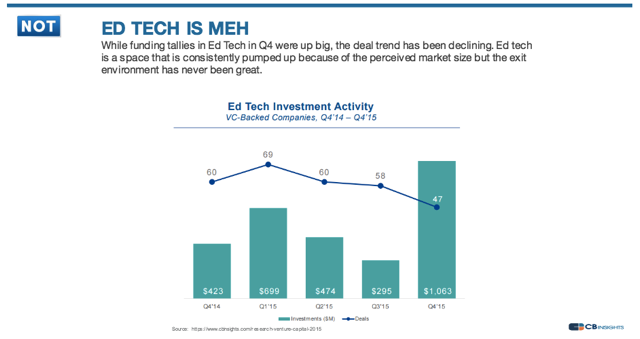 Here are my calculations about how much funding was raised by ed-tech companies in February.

The University of Phoenix is opening a “Center for Learning Analytics Research.”

Edsurge reports on a survey of pre-K teachers by early education company Teaching Strategies that found “nearly 88 percent report using technology in their classroom at least once a week.”

According to a survey of 4000 community college students, “about 50 percent of students reported having one or more mental-health condition,” The Chronicle of Higher Education reports.

Via The Chronicle of Higher Education: “To Measure Teaching, Look to Health Care and Other Industries, Says British Think Tank.” There are so many flaws in a comparison between health care and education, but hey. I’m not a think tank so what do I know.

Chicago-based LEAP Innovations has released a report on “what works” within its pilot network (that is, 15 schools in the city.) Among the tools it found to be effective was the literacy tool ThinkCerca. ThinkCerca is funded in part by Deborah Quazzo. (Remember the scandal about the companies in her portfolio seeing their revenue increase from sales to CPS? Anyway…) Quazzo’s partner at GSV, Michael Moe, sits on the board of LEAP, but Edsurge (also funded by GSV) assures us the organization has taken a “cautious approach” to this research.

According to one survey, college students say they’re using the “hook up” app Tinder to find friends. Inside Higher Ed doesn’t buy it.

“This Map Shows the Scope of America’s School Shooting Problem.”