This was the first-half of a joint presentation at Coventry University as part of my visiting fellowship at the Disruptive Media Learning Lab. The better half was delivered by Jim Groom. Our topic, broadly speaking: "a domain of one's own" 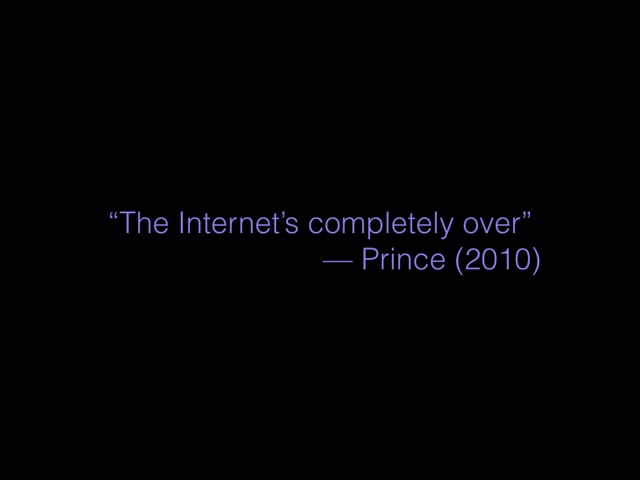 “The Internet’s completely over,” Prince told The Daily Mirror in 2010. People laughed at him. Or many of the digital technorati did. They scoffed at his claims, insisting instead that the Internet was inevitable. The Internet was the future of everything.

When it came to music, the technorati contended, no longer would any of us own record albums. (We wouldn’t own books or movies or cars or houses either. Maybe we wouldn’t even own our university degrees.) We’d just rent. We’d pay for subscription services. We’d stream singles instead. We’d share – well, not really “share,” but few would complain when a post-ownership society got labeled as such. Few would care, of course, except those of us struggling to make money in this “new economy.”

Prince was wrong about the Internet, the technorati insisted. Turns out, Prince was right. The “new economy” sucks. It’s utterly exploitative.

But many technorati would never admit that Prince was right – perhaps until Prince’s death this time last year when everyone hailed him as one of the greatest artists of our day. The Electronic Frontier Foundation, for example – an organization that, as its name suggests, sees itself as a defender of “Internet freedom,” particularly with regards to copyright and free speech online – had inducted Prince into the Takedown Hall of Shame in 2013, establishing and then awarding him with the “Raspberry Beret Lifetime Aggrievement Award for extraordinary abuses of the takedown process in the name of silencing speech.” Prince was, no doubt, notorious for demanding that bootleg versions of his songs and his performances be removed from the Web. He threatened websites like YouTube with lawsuits; he demanded fans pull photos and lyrics and cellphone videos offline. It was, until recently, almost impossible to find Prince’s music on streaming services like Spotify or video services like YouTube.

And thus Prince was viewed by some as a Luddite. But many of those folks utterly misunderstood Prince’s relationship to technologies – much like many, I’d argue, misconstrue what the Luddites in the early nineteenth century were actually so angry about when they took to smashing looms.

It was never about the loom per se. It’s always about who owns the machines; it’s about who benefits from one’s labor, from one’s craft. 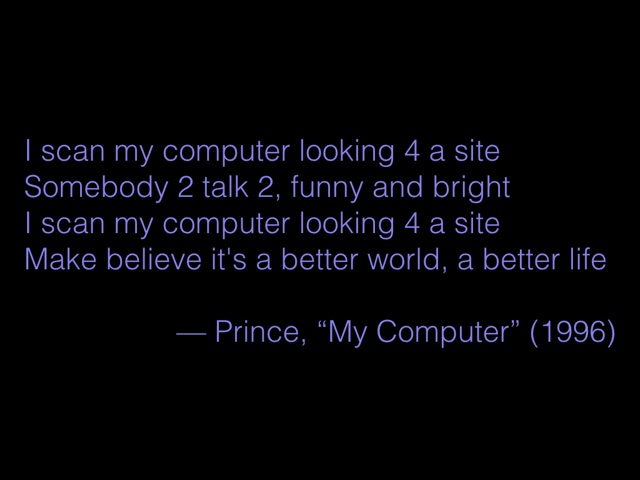 From the outset of his career, Prince was incredibly interested in computers and with technological experimentation – in how computers might affect art and relationships and creativity and love. He released an interactive CD-ROM in 1994, for example, a game that played a lot like another popular video game at the time, Myst. That video game was one of the few ways you could get ahold of the original font file for the symbol that Prince had adopted the previous when he officially changed his name. (His label was forced to mail floppy disks with the font to journalists so they could accurately write about the name change.) You could see Prince’s interest in computer technologies too in songs like “Computer Blue” from the Purple Rain soundtrack (1984) and “My Computer” from the album (his nineteenth) Emancipation (1996). The lyrics in the latter, which some argue presage social media – okay, sure – but perhaps more aptly simply reflect someone who was active in (or at least aware of) the discussion forums and chatrooms of the 1990s:

Somebody 2 talk 2, funny and bright 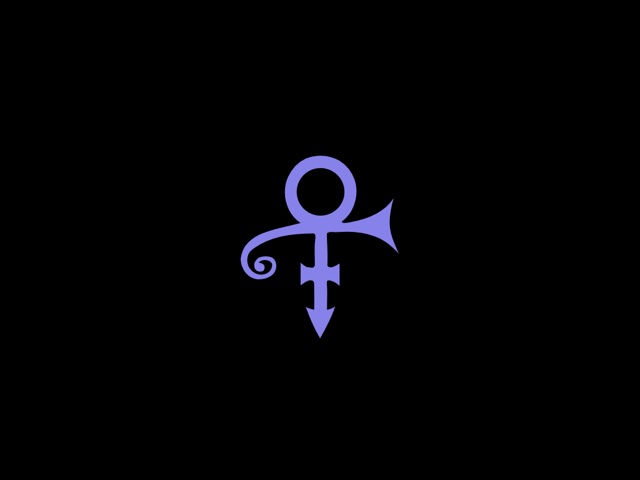 The following year, Prince released Crystal Ball, and in what was a novel move at the time, put all the album’s liner notes online, via a fairly new technology called a “Web site.” A few years later, Prince launched a subscription service that promised to give fans exclusive access to new music, again via a site he controlled.

See, Prince didn’t hate the Internet per se, although he certainly had a complicated relationship with what has become an increasingly commodified and exploitative Internet and Web (one actively commodifying and exploiting not just musicians and recording artists). Rather, the problem that Prince identified with the Internet was that it enables – is built on, really – the idea of multiple digital copies, permission-less digital copying. And Prince has always, always fought to retain control of the copies of his work, to retain control of his copyright.

“I don’t see why I should give my new music to iTunes or anyone else,” Prince told The Daily Mirror in that 2010 interview.

They won’t pay me an advance for it and then they get angry when they can’t get it."


The internet’s like MTV. At one time MTV was hip and suddenly it became outdated. Anyway, all these computers and digital gadgets are no good. They just fill your head with numbers and that can’t be good for you.

He later clarified what he meant to The Guardian: “What I meant was that the internet was over for anyone who wants to get paid, and I was right about that. Tell me a musician who’s got rich off digital sales. Apple’s doing pretty good though, right?” 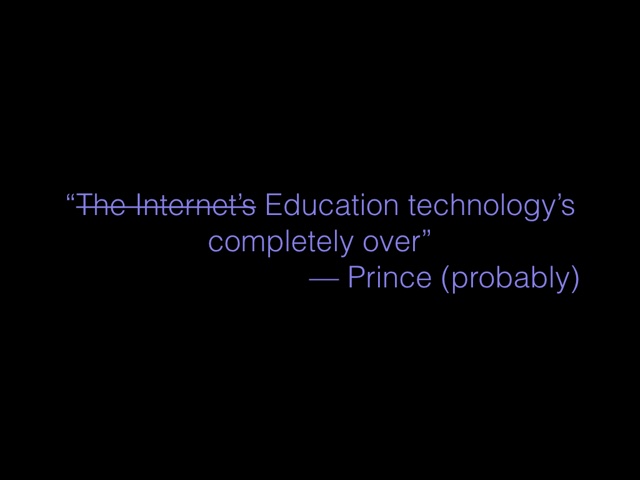 If you’re wondering why I’m talking about Prince today and not education technology, you’re not paying close enough attention to the ways in which the ed-tech industry gets rich off of the creative work (and the mundane work) of students and scholars alike. Indeed, I wanted to invoke Prince today and talk a little bit about how his stance on the Internet – and much more importantly, his stance on the control and the ownership of his creative work – might help us think about the flaws in education technology and how it views ownership and control of data, how it extracts value from us in order to profit from our labor, our intellectual property. And I hope that by retelling the story of Prince and the Internet, by telling a counter-narrative to one that’s simply “Prince hated it,” we can think about what’s wrong with how ed-tech – as an industry and as an institutional practice – treats those doing creative and scholarly work. Not because we hate or resist the Internet, but because we want to build and support technologies that are not exploitative or extractive.

Me, I will gladly echo Prince – I do so with the utmost respect and with a great deal of shock and sadness still to this day that he’s gone – “education technology’s completely over.” 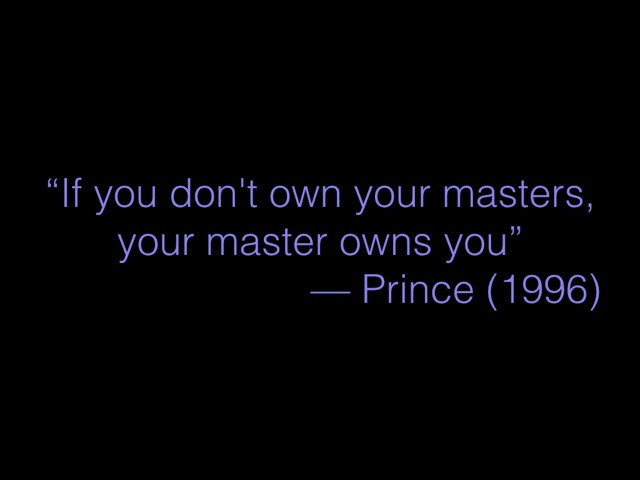 “If you don’t own your masters, your master owns you,” Prince told Rolling Stone in 1996, on the cusp of the release of his album Emancipation. (A master recording is the first, the original recording of a song, from which all subsequent copies are made.) Prince had famously battled with Warner Bros over his contract and his catalog. He’d recorded with the label from 1978 to 1996 – and that included his biggest hit record, Purple Rain. Fighting with Warner Bros had prompted Prince to change his name to the symbol. Born Prince Rogers Nelson, Prince discovered that he didn’t even own his own name, let alone his music. He hoped that by changing his name, he’d be able to get out of his contract – or at least protest its terms. He appeared with the word “slave” written on his cheek at the 1995 BRIT Awards. His ­acceptance speech at the event: “Prince. In concert: ­perfectly free. On record: slave.”

Prince fought for a long time with record labels, and arguably that makes his response to the new digital “masters” – Apple, Google, Spotify, and such – more understandable. But his assertions about masters and slaves are perhaps more than a little overstated, overwrought. And as such, I want to be a little cautious about making too much about a connection between the ownership of ideas and the ownership of bodies and how control and exploitation function in academia. 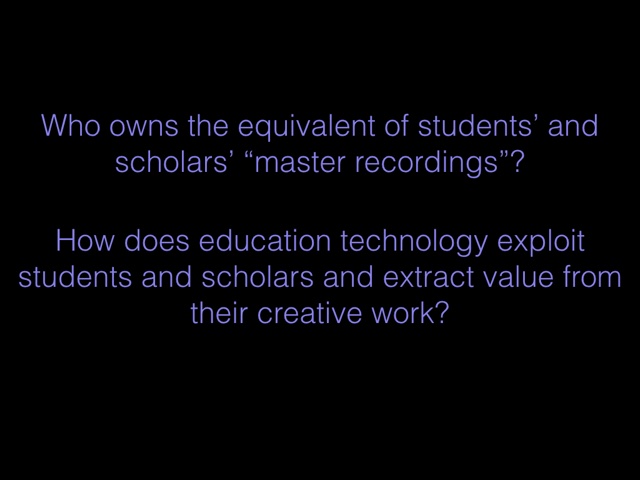 In the US (and I’m not sure how this works in the UK), if you request a copy of your educational records from your university, they send you a transcript. That is, they send you a copy. You can request a copy of your articles from academic publications. Rarely – although hopefully increasingly – do authors retain their rights. Students often find themselves uploading their content – their creative work – into the learning management system (the VLE). Perhaps they retain a copy of the file on their computer; but with learning analytics and plagiarism detection software, they still often find themselves having their data scanned and monetized, often without their knowledge or consent.

So I want us to think about the ways in which students and scholars, like Prince, find themselves without control over their creative work, find themselves signing away their rights to their data, their identity, their future. We sign these rights away all the time. We compel students to do so. We tell them that this is simply how the industry, the institution works. You want a degree, you want a record label, you must use the institutional technology. You must give up your masters. 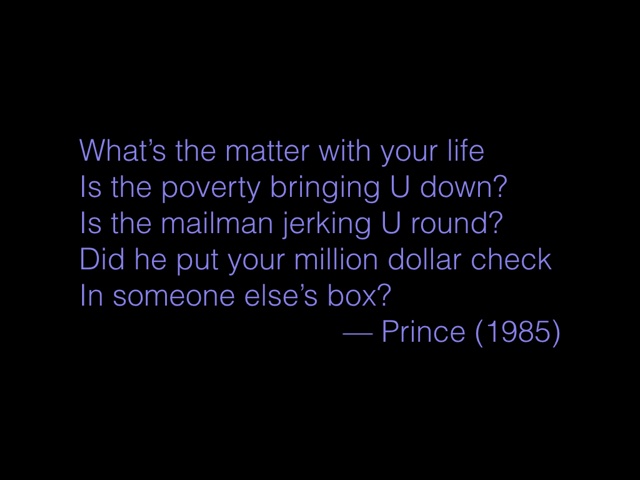 You needn’t. None of us need to. (Of course, none of us are Prince. Perhaps it seems a little overwhelming to fight the corporate masters like he did. But I believe that “domains” is one small step towards that.)