The History of Ed-Tech: What Went Wrong?

Beth Holland, a doctoral student at JHU and “EdTech Researcher” at Education Week, sent an email asking some questions about the history of ed-tech. The gist of these: how did ed-tech get from the early, inquiry-based pioneers like Seymour Papert to the crap we see today. Once my response hit more than 500 words, I thought I’d better “blog” my thoughts rather than just answer via email…

There’s a popular origin story about education technology: that, it was first developed and adopted by progressive educators, those interested in “learning by doing” and committed to schools as democratic institutions. Then, something changed in the 1980s (or so): computers became commonplace, and ed-tech became commodified – built and sold by corporations, not by professors or by universities. Thus the responsibility for acquiring classroom technology and for determining how it would be used shifted from a handful of innovative educators (often buying hardware and software with their own money) to school administration; once computers were networked, the responsibility shifted to IT. The purpose of ed-tech shifted as well – from creative computing to keyboarding, from projects to “productivity.” (And I’ll admit. I’m guilty of having repeated some form of this narrative myself.) 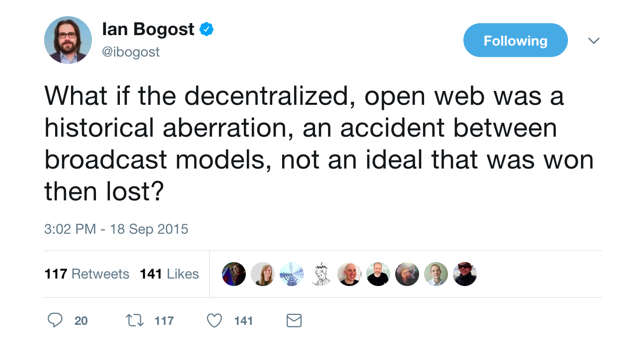 But what if, to borrow from Ian Bogost, “progressive education technology” – the work of Seymour Papert, for example – was a historical aberration, an accident between broadcast models, not an ideal that was won then lost?

There’s always a danger in nostalgia, when one invents a romanticized past – in this case, a once-upon-a-time when education technology was oriented towards justice and inquiry before it was re-oriented towards test scores and flash cards. But rather than think about “what went wrong,” it might be useful to think about what was wrong all along.

Although Papert was no doubt a pioneer, he wasn’t the first person to recognize the potential for computers in education. And he was hardly alone in the 1960s and 1970s in theorizing or developing educational technologies. There was Patrick Suppes at Stanford, for example, who developed math instruction software for IBM mainframes and who popularized what became known as “computer-assisted instruction.” (Arguably, Papert refers to Suppes’ work in Mindstorms when he refers to “the computer being used to program the child” rather than his own vision of the child programming the computer.)

(How Thorndike's ed-tech is now being rebranded as “personalization” (and by extension, as progressive education) – now that's an interesting story...