The Teaching Machine Imaginary (And an Update on the Book)

I submitted the draft of Teaching Machines to my editor at MIT Press at the end of May. I haven’t looked at the manuscript since, although I’ve been mulling over various parts and passages in my head almost nonstop. Over the course of the past few weeks, I’ve read a handful of books on writing and editing – Benjamin Dreyer’s Dreyer’s English, Stephen King’s On Writing, and Susan Bell’s The Artful Edit – but this week I turn my attention to revising the book. I’ve printed out all the pages and I’ll start making edits by hand – my preferred method. (It’s my preferred method of writing too but I do recognize that it is very, very slow. And so I type.)

One of the realizations I’ve had recently, having chatted casually with various non-ed-tech professionals about the book – my eye doctor, for example, and my hair stylist – is that I need to have much richer descriptions of what the teaching machines actually look like and what they actually do. (Yes, yes, yes. This is obvious.)

My elevator pitch for the book typically goes something like this: “It’s the story of the psychologists who, in the mid-twentieth century, built machines – not computers, before computers – that they claimed would automate and personalize education.”

That verb “claimed” makes it sound like this was a promise unfulfilled. And to a certain extent, that’s true. Teaching machines never sat on every desk in every classroom in America. But their proponents would insist that, when and where these devices were used – and they were used at home, at school, by the military, by manufacturers – that they did indeed enable people to learn at their own pace without the need for human instructors.

“When you say ‘teaching machines from the 1960s’,” one person recently told me, “I picture the robot teacher in The Jetsons.” (I’m never sure if The Jetsons are meant to reflect “the future” as much a nostalgia for an invented future past – I’m inclined to think it’s always been the latter, even when the show first aired. It is, in many ways, incredibly reactionary.)

The Jetsons did appear on primetime television during the peak of the teaching machine craze, but Mrs. Brainmocker, Elroy’s robot teacher (who is, I must presume by her title, a married robot teacher), appeared in just one episode – the last one of its 1960s incarnation – and only quite briefly at that. 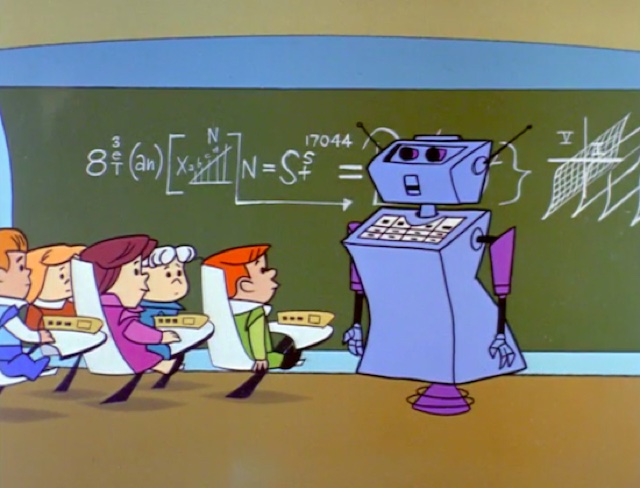 In “Elroy’s Mob,” a scene at the Little Dipper School opens with Elroy talking through a math problem written on the blackboard. His answer is gibberish: “…And eight trillion to the third power times the nuclear hypotenuse equals the total sum of the trigonomic syndrome divided by the supersonic equation.”

“Now one second while I check over your answer,” Mrs. Brainmocker responds, rapidly clicking on the panel of buttons on her chest. “Boink!” A slip of paper emerges from the top of her (its?) head. “Absolutely correct, Elroy,” she reads. “You really know your elementary arithmetic.” As she begins to gush about what a pleasure it is to teach students like him, she starts to stutter. “I’ve got a short in one of my transistors,” she apologizes to the class.

Mrs. Brainmocker was, of course, more sophisticated than the teaching machines that were peddled to schools and to families at the time. These machines couldn’t talk. They couldn’t roll around the classroom and hand out report cards. Nevertheless, Mrs. Brainmocker’s teaching – her functionality as as a teaching machine, that is – is strikingly similar to the devices that were available to the public. Mrs. Brainmocker even looks a bit like Norman Crowder’s Autotutor, a machine released by U. S. Industries in 1960, which had a series of buttons on its front that the student would click on to input her answers and which dispensed a read-out from its top with her score. 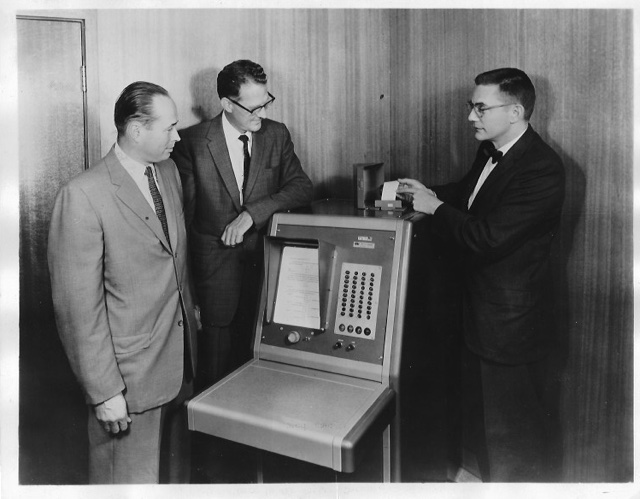 Teaching machines and robot teachers were part of the Sixties’ cultural imaginary. But that imaginary – certainly in the case of The Jetsons – was, upon close inspection, not always particularly radical or transformative. The students at Little Dipper Elementary still sit in desks in rows. The teacher still stands at the front of the class, disciplining students who aren’t paying attention. (In this episode, that’s school bully Kenny Countdown, who’s watching the one-millionth episode of The Flintstones on his TV watch.) There were other, more sweeping visions of the future of teaching machines in the late 1950s and early 1960s – Simon Ramo’s “A New Technique of Education,” for example, that featured pervasive surveillance, television-based instruction, and “push-button classes.” But it’s worth underscoring that often what gets touted excitedly as “the future of education” and what gets absorbed into the cultural imaginary about that future are very rarely all that different from the present. And once you look closely at the technologies in question and their associated practices in these futures, you’ll find that they’re very rarely that exciting. Digital worksheets and the like. Animated drill-and-kill.

Proponents of teaching machines in the 1950s and 1960s were quite aware that some of the excitement for their inventions was bound up in the novelty. Students responded enthusiastically to the new devices – but would that last? (A familiar concern to this day.)

In order to help write some prose about teaching machines, I recently bought one off of eBay – a Min/Max II manufactured by Teaching Machines Inc, along with a “programed” course on electricity. 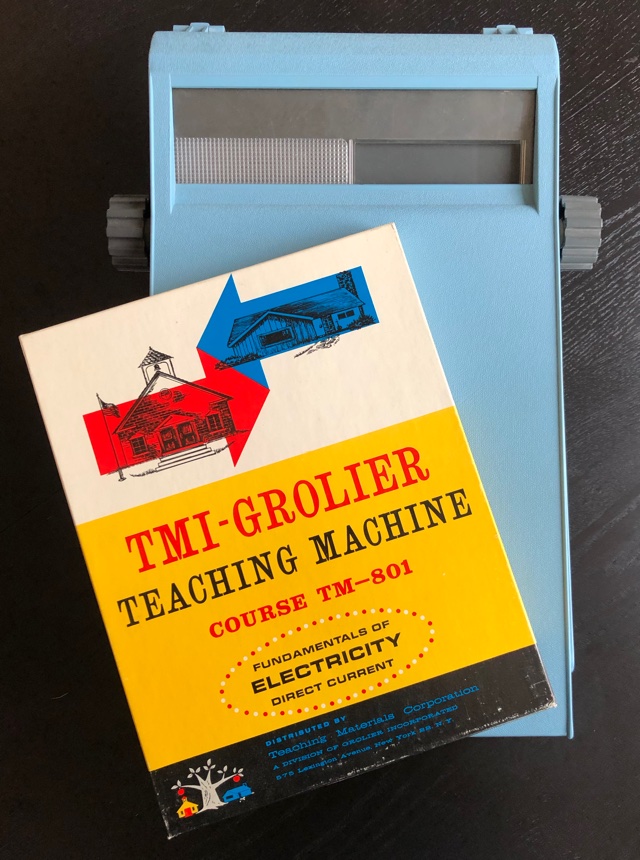 The Min/Max was larger than I’d imagined – even though I’d read pages and pages of descriptions of the machine and thought I knew what to expect: about 18 inches long and 10 inches across. It was bulky, but as it was made from plastic, not particularly heavy. Even so, I had a hard time using it on my lap and it took up a lot of space on my desk. The only mechanical part of the machine: dials on each side used to advance the paper-based programming materials with a roller mechanism similar to a typewriter’s. The lid lifts to insert those papers – a max of 100 sheets, the Min/Max cautions.

The electricity course, for its part, contains 150 pieces of paper, printed on both sides, each side with about 5 “frames” of instructional content. I slid about half the papers into the machine, and spun the knob until the first few questions appeared in the clear plastic window at the top. The first few frames introduce the student to programmed instruction, explaining how to read the question, write the answer in the blank space given, then push the paper up until the answer can be checked. “The steps in this program are fixed so that you should be right most of the time,” the instructions explain. The course then gives a couple of sample questions that demonstrate. “If the answer to a question is a word to be filled in the blank, it is shown with a line like this ______. George Washington was the first ______ of the U.S.”

The first electricity question: “All matter is made of molecules (say MAHL-e-kules). Wood is made of molecules. Water is made of ______.” (The answer: molecules.) The course moves painfully slowly from there. It isn’t until question 9 that we get to atoms, question 17 that we get to electrons. I was bored well before then. Even with the promise that I could “move at my own pace,” that pace was necessarily slowed by the drudgery of the small steps in each frame. And I still had 1436 frames to go. 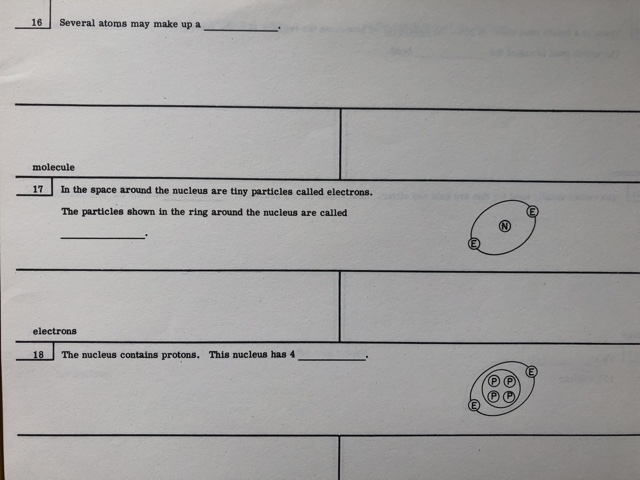 I want to be clear here: this drudgery isn’t simply a result of the teaching machine. It is tied to “programmed instruction,” to be sure. (That method of designing educational materials, and not the hardware, is one of the most important legacies of the teaching machine movement.) But it’s also simply (and sadly) part of the drudgery of schoolwork – drudgery that, as the children’s book Danny Dunn and the Homework Machine (1958) observed, was unlikely to be eliminated by computers. In fact, as Danny and his friends found out, students would just be expected to do more dull work more quickly.

The challenge, I think, is to express to readers this drudgery not only in contrast to the fantasies of shiny and efficient teaching machines – stories about robot teachers or otherwise – but also as the same sort of drudgery that today’s ed-tech dictates. Calling it “personalized learning” doesn’t make today’s computer-based instruction any more exciting. I promise you.